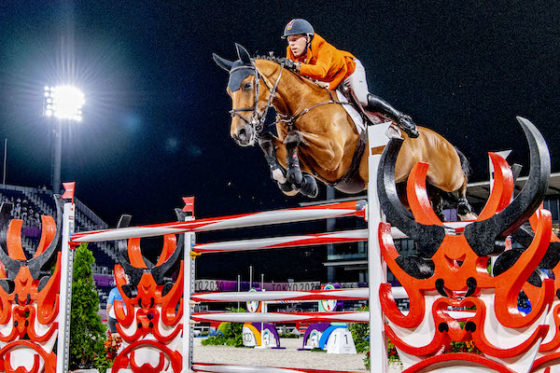 The Dutch Tokyo Olympic medal haul inched up to 23 on Wednesday, after showjumper Maikel van der Vleuten won bronze in the individual event on his horse Beauville Z.

The win puts TeamNL into 10th place on the medal table, behind Italy and above the Republic of Korea.

The Netherlands had already added two medals to its Tokyo Olympics haul in the early hours of Wednesday morning – a silver for open water swimming and bronze on the track.

Femke Bol, 21, set a new European record of 52.03 on the 400 metres hurdles with her third place behind the Americans Sydney McLaughlin, who completed the race in a new world record time of 51.46. Defending champion Dalilah Muhammad took silver in 51.58.

Earlier in the day, defending champion Sharon van Rouwendaal took silver in the 10 kilometre open water swim. ‘I could not have done any better than I did,’ Rouwendaal said, after completing the distance in 1.59.36. Brazil’s Ana Marcela Cunha took the gold.

The Dutch women’s hockey team are also guaranteed of a medal, having reached the final with a 5-1 win over Britain. They will meet Argentina in the final on August 6.

The overnight wins take the Dutch medal total to 23, just two short of their record. But with a guaranteed hockey medal and one for middleweight boxer Nouchka Fontijn, the Netherlands is virtually assured of beating the 25 medal total set in Sydney.

The 5,000 metre Olympic champion Sifan Hassan easily qualified for the Friday final of the 1,500 metres, but said she was very nervous about the race, having fallen in the heats.

On the athletics track, Anouk Vetter ended the first day of the women’s heptathlon in the lead, after setting a new personal best in the 100 metres hurdles.

Noord Vidts and reigning Olympic champion Nafissatou Thiam, both from Belgium, are in second and third place after the hurdles, shot put, high jump and 200 metres.  The long jump, javelin and 800 metres take place on Thursday.

But there was disappointment for the women’s handball team, who lost 22 to 32 to France in their efforts to win a semi-final place.

Will Smith open over niet-monogaam huwelijk