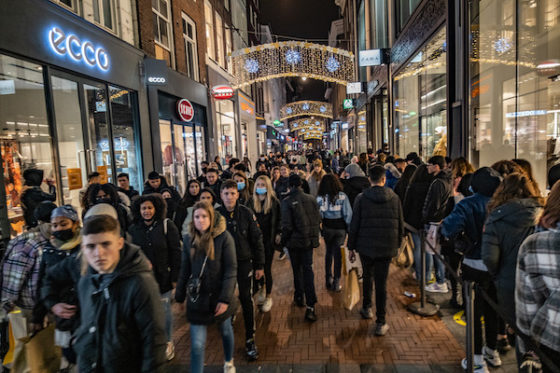 Eindhoven mayor John Jorritsma has called for a nationwide approach to dealing with busy shopping centres after bargain hunters packed out city centre shops on Friday evening and Saturday.

So called Black Friday shopping led several cities, including Eindhoven, Rotterdam and Dordrecht to close shops early on Saturday while in other cities, officials urged people to stay away.

In Apeldoorn police called on shoppers to leave the city centre, while in The Hague, Leiden and Amsterdam local officials asked people to stay home. Amsterdam also introduced a one way system on the Kalverstraat in an effort to control the crowds.

‘As soon as I evoke my emergency powers and say no-one can go shopping after 3pm, people go to Den Bosch, or Breda, or elsewhere,’ Jorritsma said. ‘We need to agree the rules to make organising and enforcing this possible at a national level.’

Jorritsma said he will raise the issue at Monday’s regional safety board meeting with an eye on the Sinterklaas and Christmas spending sprees ahead.

On Friday, prime minister Mark Rutte said local mayors have the power to deal with overcrowded shopping centres and that he was not aware of the need for a nationwide approach.

A spokesman for retail association InRetail told broadcaster NOS that while it had been busy in the bigger cities, ‘if we look at the picture from Veendam to Oostkapelle, then things went relatively well’.

He also said that 35% of retailers who took part in Black Friday campaigns had opted not to do so this year.