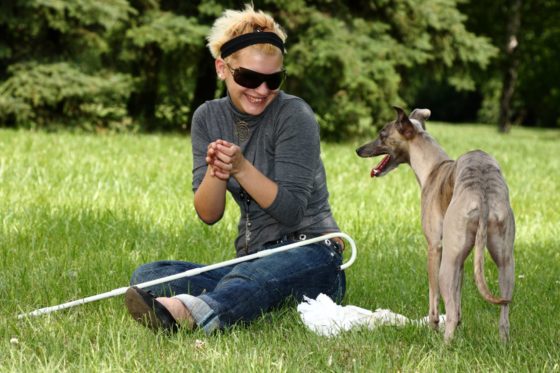 Blind people may be able to get back partial vision thanks to brain implants developed by Dutch scientists.

According to an article published this week in Science magazine, ‘restoration of vision in blind people through a brain implant is on the verge of becoming reality’.

Research at the Netherlands Institute for Neuroscience has found that special implants placed in the area of the brain that processes visual information could make it possible to recognise ‘dots, lines and letters’ generated by electrical signals – without needing signals sent by the eyes at all.

‘Our implant interfaces directly with the brain, bypassing prior stages of visual processing via the eye or the optic nerve,’ said Xing Chen, postdoctoral researcher in the team of scientists. ‘In the future, such technology could be used for the restoration of low vision in blind people who have suffered injury or degeneration of the retina, eye, or optic nerve, but whose visual cortex remains intact.’

Since the 1970s, scientist have been experimenting with stimulating the visual cortex of the brain to generate perceptions of shapes, but until now the implants have only been able to communicate a small number of ‘artificial pixels’. The Dutch team has used cutting-edge microchip, production and implantation technology to come up with more sophisticated and stable implants.

As part of the research, implants composed of 1024 electrodes were put in the visual cortices of two monkeys who could see. Their brains were given electronic signals representing artificial lines, moving dots and letters and the scientists monitored how they responded.

The scientists believe their positive results could lay the foundations of a brain implant that could help profoundly blind people to regain ‘functional vision’ with the help of computer-based signals communicating to their brains instead of their eyes. The institute describes this as a ‘visual prosthetic.’

‘You can compare it to a traffic board on the road [which uses a matrix of dots], Pieter Roelfsema, director of the institute, told NOS. ‘When a light is on, you see a dot, but if you turn on the right pattern of lights, you see a letter or word. This is the kind of vision that blind people may be able to have in the future.’

However, there is a long way to go, he added. ‘In our eyes, we have a million pixels but with the implant in the visual cortex we currently have around 1,000 and we want 10,000. This is still a lot worse than normal vision, but it is more than nothing.’