AZ set up mid-season showdown with Ajax after Tilburg twist 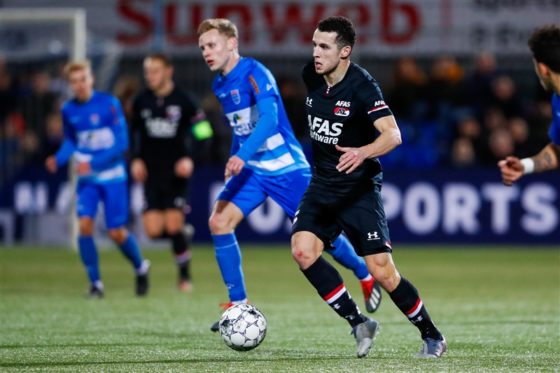 AZ Alkmaar took full advantage of Ajax’s first defeat of the season to set up an enticing top-of-the-table clash at the midway point of the season.

A fine volley from Myron Boadu and two goals from the outstanding Ousamma Idrissi gave the Alkmaarders a 3-0 victory in Zwolle and closed the gap at the top to three points.

AZ will go level on points with Ajax if they beat them on Sunday in the first match since August to be played in their own AFAS stadium, which was closed after part of the roof collapsed in a storm.

Coach Arne Slot said he was looking forward to the showdown: ‘We were six points behind a few weeks ago and we felt we were capable of winning our games, but we expected Ajax to keep doing the same. It’s a fantastic challenge for both teams.’

Ajax’s 2-0 defeat to Willem II in Amsterdam on Friday ended an unbeaten home run in the league stretching back more than two years. Mike Ndayishimiye put the Tilburgers ahead with a penalty at the end of the first half before Damil Dankerlui settled the game with a low shot 12 minutes from time.

PSV Eindhoven put their recent woes behind them by beating Fortuna Sittard 5-0 in a match that was most notable for Ibrahim Afellay’s return to the club after a nine-year absence. Afellay, who last played a competitive match nearly two years ago for Stoke City in the English Premier League, was greeted with thundering applause when he replaced Denzel Dumfries in the 81st minute.

At the bottom of the table, RKC Waalwijk came within centimetres of their third win in four matches against Heerenveen when Darren Maatsen’s shot crashed off the underside of the crossbar after 78 minutes. Stijn Spierings had equalised shortly beforehand with a 25-metre thunderbolt, but Maatsen’s stayed out and the Frisians scored twice in the closing stages to rise to fifth in the table.

ADO Den Haag remain second from bottom after being involved in one of three goalless draws of the weekend, at home to FC Twente, in the first match since Alfons Groenendijk’s departure.

Two other teams under temporary management, Vitesse and Feyenoord, also failed to find the net in a game where the VAR provided the main talking point. Referee Pol van Boekel missed a clear push by Feyenoord’s goalkeeper Nick Marsman on Riechedly Bazoer, but gave a penalty after consulting the VAR panel.

When Marsman saved Tim Matavz’s spot-kick, Van Boekel ordered a retake because the keeper had moved too quickly off his line, only to change his mind again on the advice of the video referee.

Sparta Rotterdam and Heracles were the other teams to draw a blank in a match that only sparked into life at the end with the controversial dismissal of Heracles’ Joey Konings, who appeared to have clashed accidentally with Jurgen Mattheij just outside the penalty area.

Utrecht ended a run of three successive defeats and moved up to sixth thanks to a late goal from Bart Ramselaar against Groningen, who have taken just one point from their last three games.

VVV were the only team in the bottom half of the table to win as they beat Emmen 2-0 at home to draw level on points with both their opponents and local rivals Fortuna. An early goal by Johnatan Opoku and a last-minute strike from Peter van Ooijen gave interim coach Jay Driessen his second win in three matches.