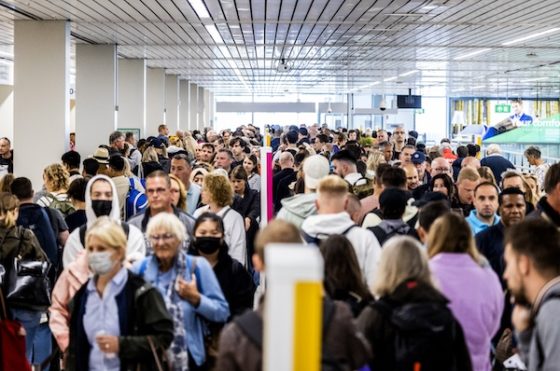 Passengers are again being faced with very long waits at Schiphol, leading the airport to recommend people wear comfortable clothes and shoes and bring water to drink while queuing.

Thousands of people have complained about the chaos on social media, with passengers reporting missed flights and waits of up to six hours to get through all the controls.

@klm we got to Amsterdam Schiphol airport yesterday 3 hours early but had to wait 5 hours to get through security so missed our flight. We have now been at the airport for 16 hours and still no one has helped us. We just want a flight home this is no way to treat people

Last weekend, the situation was so serious that the border police were forced to intervene when one group of frustrated passengers threatened to storm past security checks, Dutch media reported.

The problems at Schiphol are down to staff shortages, particularly baggage handlers and security crew.

Trade union FNV is now warning of strike action unless a deal on reducing the pressure of work at the airport is on the table before June 1.

The union has been in talks with the airport authority since the problems in May but there is ‘not much to say’ about progress, union official Joost van Doesburg told broadcaster NOS.

Coming up on my 16th hour stuck in @Schiphol airport because I missed my flight thanks to crazy queues that took 5 hours to get through security! No warning from @KLM – worst of all absolutely no help to get booked on a new flight! never ending queues with no help! #klm #Schiphol

Missed my flight after 4 hours of waiting in line(still haven’t made it to security) @klm @Schiphol this is a very very poor job, I am going to miss an interview because of this. Fix your god damn airport and airline. pic.twitter.com/7iaMvdhP7M

A spokesman for the airport said the busy summer period would be ‘a challenge’. He could not say if flights would be cancelled or shifted to other airports as they were in May. ‘We are keeping all our options open,’ the spokesman said.

According to news agency ANP, Schiphol airport chief Dick Benschop is returning from the World Economic Forum meeting in Switzerland later on Tuesday to take charge of the situation.