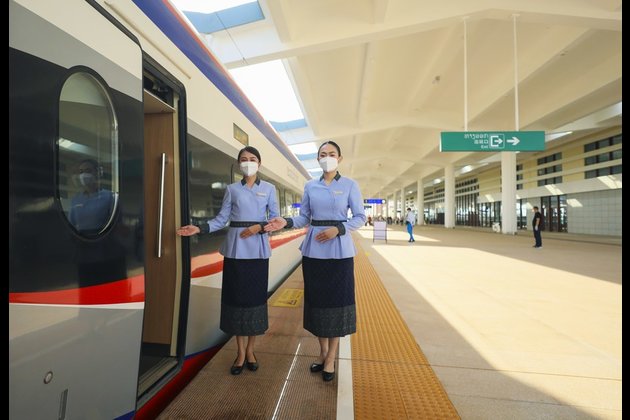 The China-Laos Railway is a docking project between the China-proposed Belt and Road Initiative and Laos' strategy to convert itself from a landlocked country to a land-linked hub. It has helped revive tourism in Laos as the demand from passengers traveling between Vientiane and the ancient capital of Luang Prabang is growing.

The China-Laos railway has shortened the traveling time between cities along the route, enabling people along the line to seek education, visit families, or receive medical attention a lot faster.

Kingkeo Duangphanam, a 32-year-old mother from Luang Prabang province, told Xinhua that traveling to and from her hometown with her newborn baby has become far more convenient since the railway started operation.

"This is my sixth time traveling on the railway. I came to Lao capital Vientiane yesterday to take my kids to a hospital. Today, I am going back to Luang Prabang," she said.

Vixay Niensiphon, a 44-year-old serviceman from Oudomxay province, said that his experience traveling by train was fantastic.

"I always choose to take the train over other transportation options, when I have the chance. The Laos-China railway is comfortable. The train is completely clean and the service is great."

"I've traveled to Luang Prabang and Oudomxay by bus before and it took a whole day to reach the destinations."

"The railway is fast, easy and cost-effective, but most importantly, I can reach my destination significantly faster," Vixay said.

Vixay added that he is planning to take his family to travel to Oudomxay from Vientiane by train at the end of the year.

"Now, I am also inviting my Lao siblings and foreign guests to take a train tour in Laos, to see how good it is," said the Lao officer.

The China-Laos railway has helped revive tourism in Laos as the demand from passengers traveling between Vientiane and the ancient capital of Luang Prabang is growing.

Maikeo Sengaly told Xinhua that he was traveling to Luang Prabang for a family vacation and this was his first time taking the train.

"My family and I decided to take a train for this trip, because we are curious about the train," said the 45-year-old businessman.

Maikeo said that the first time he heard about the China-Laos railway, he felt grateful and hoped that all Lao people could have the chance to experience traveling by train.

The China-Laos Railway is a docking project between the China-proposed Belt and Road Initiative and Laos' strategy to convert itself from a landlocked country to a land-linked hub.

The electrified passenger and cargo railway that went fully operational on Dec. 3, 2021, is built with the full application of Chinese management and technical standards. 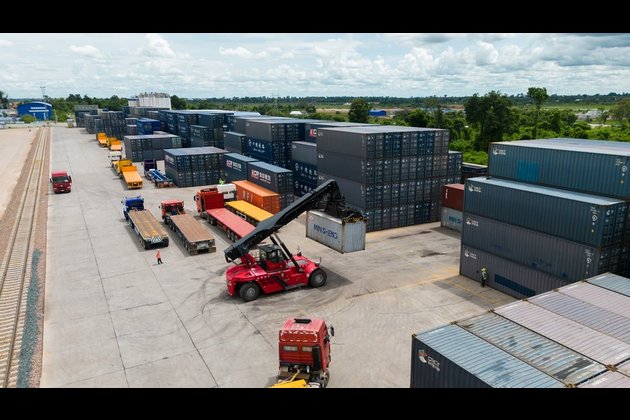 The latest report issued by the Tourism Development Department under the Lao Ministry of Information, Culture and Tourism at the end of August showed the outlook for the country's tourism industry is positive.

The full operation of the China-Laos Railway, and the appeal of the scenic Vangvieng, the Luang Prabang World Heritage Site, and the low value of the kip (Lao currency), are among the main attractions for visitors from neighboring countries, said the report.

According to the Laos-China Railway Co., Ltd. (LCRC), a joint venture based in Vientiane and responsible for the operation of the railway's Lao section, so far, the Lao section of the China-Laos Railway has shipped a total of around 2 million tons of goods, most of which are cross-border goods, and has carried 1.26 million passengers.

The LCRC operation director, Du Zhigang, told Xinhua recently that the amount of freight transportation has been showing an upward trend since its opening.

According to Du, the goods shipped from the Lao side include rubber, barley rice, cassava, coffee, beer, ores and potash, among others, while daily necessities, mechanical parts, auto parts and electronic products are shipped from China.

"The train tickets are quite popular because our passengers are eager to experience our EMUs (electric multiple units), especially those from neighboring countries, like Thailand," said Du. 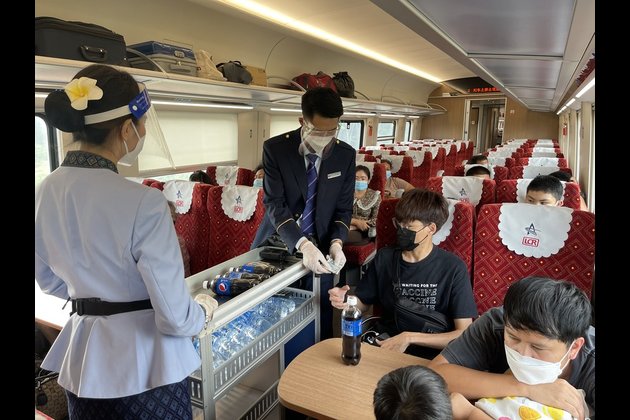 Thanyart Areeyat, a tour guide from Thailand, is no stranger to the railway and the bullet trains.

"Everyone is interested and excited about the China-Laos railway!" Thanyart told Xinhua at the Vientiane Railway Station recently.

The 28-year-old said that she was deeply impressed by the "cleanliness and smoothness" of the train running on the China-Laos railway.

She said that the most popular destinations for her tour group members are Vangvieng and Luang Prabang.

"Curiosity about the train makes many Thai people decide to travel to the north of Laos and it will be a special experience for them to take a bullet train in Laos," said the tour guide.

"Most of them take photos and videos along the way. But some of them can take a nap easily because the train rides are smooth and seats are comfy," said Thanyart, adding that she hopes to take a train trip from Laos to China in the near future.

"Thai tourists will also be really interested in taking a bullet train directly to China," she said.