We were in a back garden not Baku, but when Wales scored it was still brilliant | Elis James

I must admit, it was weird. Watching the game at a house, in Cardiff. Usually if Wales play at home, I am there, standing where I always stand (Canton, Block 105). If the game is away, childcare permitting, I try to go. So for a tournament match, a tournament match to be taking place and not be in attendance? Inconceivable.

Despite having tickets for the Switzerland game in Baku, I watched it with some other refund boys in north Cardiff, the group of friends I have watched Wales with for years. We were hosted by Gwion, the logistics man behind our Wales away trips, who put the energy he’d usually reserve for sorting an Airbnb in Denmark or Cyprus into preparing a barbecue and parasol adjustment, so our view of the action wasn’t impeded by uncharacteristic Welsh glare from the sun.

Most Wales fans have stories of sacrifice from Euro 2016, cramped accommodation, endless double shifts being worked in the runup to the tournament, second jobs being taken because they just had to be there. Supporters of a certain vintage will remember sacrifices they would have made had we qualified (“I had big plans for USA ’94. I was going to sell the car”), but the pandemic meant that only around 300 Wales fans made the trip to Azerbaijan. For the rest of us, we had to make do with the TV.

In many ways, it was the same. We talked about team selection beforehand, discussed Aaron Ramsey’s fragile fitness like he was some precious artefact in a museum that was gearing up to admit a coachload of unruly teenagers. Some Rob Page sleight of hand over the previous few weeks meant that when the side was announced, the 4-2-3-1 with Kieffer Moore starting up front (a system that seemed to have been sidelined in recent months) came as a welcome surprise to all.

Judging by conversations online and on social media – it was the team the majority of supporters wanted. I pointed out that Alf Ramsey devised his tactical masterstroke “the wingless wonders” in 1965, but reverted to his previous shape during the first few months of 1966 for England’s World Cup warm-ups, as he wanted to surprise his opposition. Had Rob done the same? Either way, if the team didn’t perform – we couldn’t blame the manager. He had done what most of us wanted. 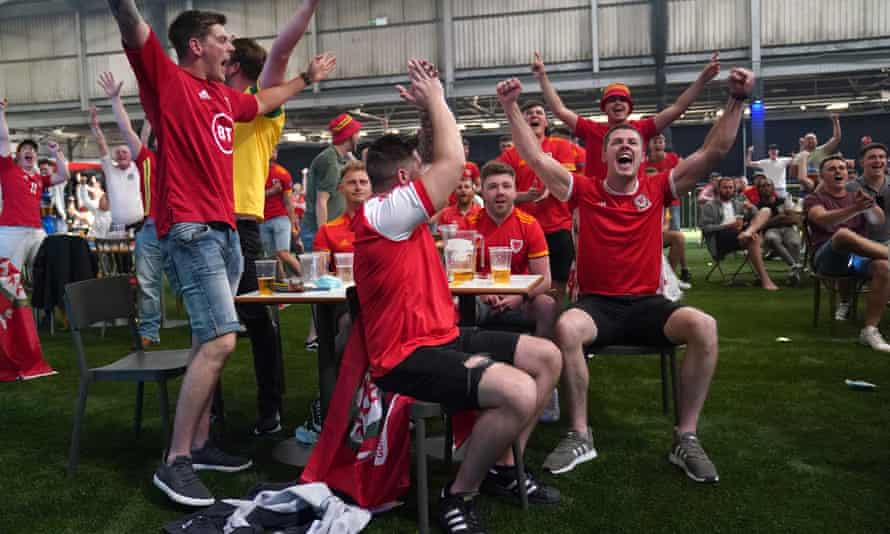 Wales fans enjoy the moment at a fanzone in Cardiff where many will gather again for Wednesday night’s crucial Group A game against Turkey. Photograph: Jacob King/PA

Although singing the anthem in a suburban garden felt slightly strange, the part of me desperately looking for positives enjoyed seeing Wales as the centre of attention on TV, knowing that my experience was the same as millions watching all around the world.

Like most people, my introduction to international tournaments was watching on television – in my case, the sensory overload of Italia ’90 – unflappable Des, Nessun Dorma and stadiums that seemed absolutely vast by British standards. Having been in France for Euro 2016 I had missed out on this aspect, I was too busy playing my part in the stands. I have talked to people who watched all of the games five years ago in Wales, in crammed pubs, town squares, fan parks. They speak as warmly of their experience as I do of mine - “I talked to people I hadn’t seen since school, Elis. One bloke I saw was quiet as a mouse in school but when Neil Taylor scored against Russia he was shirtless, hanging off a lamppost. I haven’t seen him since.”

The match stats awarded the Swiss 64% of the possession. If you think that makes uncomfortable reading, try watching it. Wales were hemmed in, 1-0 down, and now talk in Gwion’s back garden turned to making changes. Grasping the nettle. Courage. At one stage I even said “better to die than to live on your knees” with a questioning intonation and a few people asked if I’d got that from a Manics album. And then it came. Former lifeguard and Truro City striker Moore using all of his 6ft 5in to power home a brilliant header. As we danced around the garden, for a second it felt totally normal. It felt brilliant.

Wales then had to hold on for around 20 minutes, as everyone muttered: I’d take this, this is a good point/I’d take a point, I always said I’d take a point/Fi’n hapus gyda hwn [I’m happy with this].

Switzerland were denied a deserved win by a VAR decision which was reassuringly free of contested armpits, lines being drawn on the pitch by a boffin and arguments in the studio about whether a striker’s elbow being millimetres in front of a defender when the ball was played constituted an advantage, when you can’t actually score with an elbow anyway. No. The goal was rightfully disallowed, and I would like to retract everything negative I have ever said about VAR on social media, in my job bringing levity on various football podcasts and as a handsome but relatable TV presenter. As Joe Allen put it on S4C, “dwi’n caru VAR [I love VAR”]. VAR for life.” The Welsh Dalai Lama, Dai Lama, spoke for everyone on Twitter when he said: “I love VAR. I wish it was my dad.”

How do I sign up for sport breaking news alerts?

And so on to Turkey on Wednesday night. It will be a very different proposition to last Saturday afternoon. Azerbaijan’s geographical proximity to Turkey means Welsh fans will be vastly, overwhelmingly outnumbered in the ground. Considering our final group game is against the impressive Italians in Rome, where Italy haven’t lost a competitive fixture since 1953, Wednesday night is huge. But this is where I’ve always wanted to Wales to be. Pressure. Is. A. Privilege.

It was widely thought to have been agreed that the refund boys would host a game each, and that Wednesday is Matthew’s turn. On hearing this, Matthew said “Er, I suppose you’re welcome at my house”, which didn’t feel like much of an invitation. So it’s all back to Gwion’s. Let’s hope for a better result this time.

Ex-Real Madrid midfielder Pedro Leon has moved to Fuenlabrada. She signed Zozulya yesterday
Diego Costa can move to Besiktas. He is offered 3 million euros a year and 2 million for signing
Richard Dunn: Diash is young, but he has a special aura around him. He will be able to claim the captaincy at City
Rafael Benitez: Working at Everton is a chance to show that I want and can compete with anyone
Davide Calabria: It's even better if no one believes in Milan. Our goal is to add
Lyon made a request to Chelsea for Emerson. The defender of the Italian national team is Interesting to Inter and Napoli
Lewandowski trained on the weekend to get in shape before the start of the season

'A sheikh boarded with a falcon' : The story of Wales' first airline

Mum breastfeeding son, 4, 'doesn't give a damn' what others think

Is Monaco in France?

Tyneside piers closed off due to anti-social behaviour

Daughter helped alcoholic mum - by placing her on the weighing scales

Man drowns after jumping into sea in Blackpool to save stranger

Must respond! Britain urged to fire back at Iran as missile strike kills UK man

Sheppey United player applauded by teammates after coming out as bisexual

Man, 41, charged with murder after ‘partial’ remains of 83-year-old woman found at her home after disappearance

Children can win a dream day at Twycross Zoo

Important changes to visiting arrangements at Blackburn and Burnley hospitals

Simone Biles: Soaring and stumbling in search of a safe landing

Brooke Vincent 'gorgeous' on girls' night out after her second child