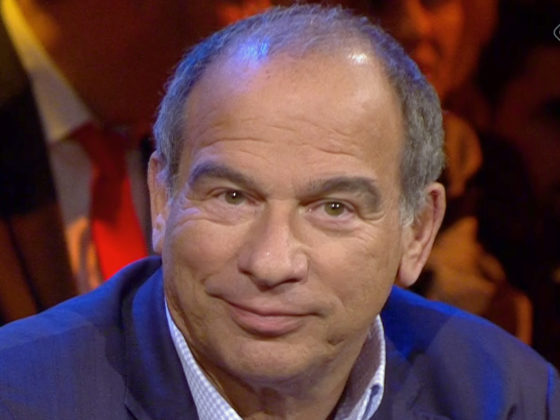 The full-page cartoon depicted a grinning De Hond, who is of Jewish heritage, holding two sets of puppet strings in his oversized hands, echoing the ‘puppet master’ trope used in Nazi propaganda of the 1930s and 1940s.

Volkskrant editor Pieter Klok issued an apology in which he said the image was ‘too reminiscent’ of anti-Semitic cartoons of the past.

Former Labour leader Lodewijk Asscher, who is also Jewish, was among several politicians and media commentators to denounce the cartoon on Twitter.

Klok said: ‘It started with a picture editor with not enough historical awareness. He proposed it and approved it. After that too many people did not look at it closely enough.

At the weekends we have fewer staff and fewer chances to review an image like this, so you run the risk of this kind of dreadful incident.’

The cartoon illustrated a feature on De Deventer Mediazaak, a six-part podcast about a high-profile murder case in 1999. The murder became a cause célèbre when dozens of celebrities backed a media campaign led by De Hond to recognise the killer’s conviction as a miscarriage of justice.

De Hond told the podcast presenter Annegriet Wietsma that the experiences of his Jewish parents during the war – both were widows of other Dutch Jews who were killed in the Holocaust – had shaped that sense of injustice that drove his campaign to free Ernest Louwes.

Later evidence, including DNA analysis of blood found on the victim’s clothes, indicated that Louwes was indeed guilty, while the targeting of De Jong and his partner prompted celebrities to increasingly distance themselves from De Hond’s campaign.