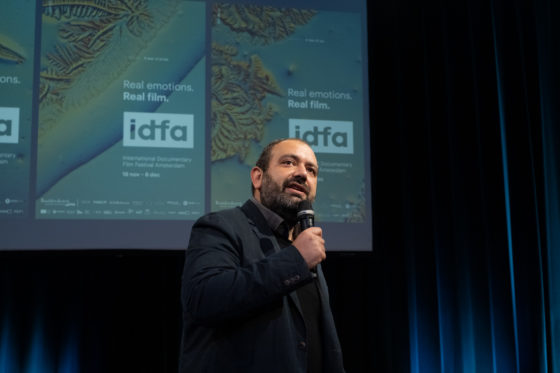 When the 33rd International Documentary Film Festival Amsterdam kicks off on the 18th November, it will be very different from previous editions, artistic director Orwa Nyrabia told a news conference on Wednesday afternoon.

The festival, which can be attended both physically and online, ‘has an extra value this year’, Nyrabia said. ‘It is a journey that we believe takes us beyond the overwhelming immediate moment; One that reminds us that – despite the pandemic – there is so much more to see, to think about, and to be concerned about’.

While this year’s line-up of 258 films will be smaller than in previous years, the festival still includes documentaries from as many as 72 different countries.

Almost half the festival’s films are directed by women this year as are 58% of the films in IDFA’s competitions. ‘We take inclusivity very seriously’, Nyrabia said.

Nyrbia also stressed IDFA’s support for the arts industry, which has suffered a considerable blow due to the Covid-19 pandemic.

‘As long as cinemas in the Netherlands are open, every film will be shown in the cinema,’ he said. ‘IDFA will be with the cinemas, with the distributors and with the filmmakers who are keeping the hope of premiering films in theatres’.

As international film enthusiasts will not be able to travel to Amsterdam as usual, the organisers have developed a platform to allow viewers around the world to have the experience of attending the festival physically.

However, the online screenings for viewers in the Netherlands will only be available at a fixed time rather than being made available to access at leisure. This, the organisers say, aims to give the audience a sense of togetherness in the face of the pandemic.

Six of the films will also be shown at cinemas around the Netherlands.

General ticket sales for the festival will begin on 12th November.