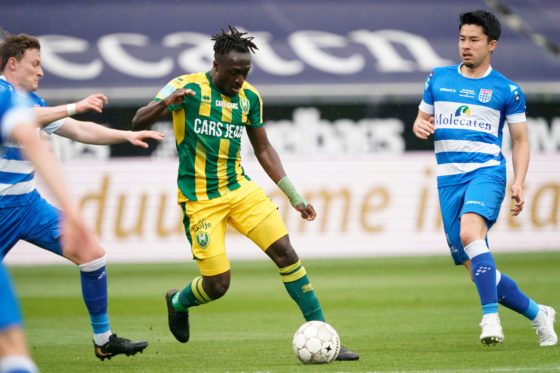 ADO Den Haag boosted their hopes of avoiding relegation from the Eredivisie as an early goal by Bobby Adekanye earned them a 1-0 win in Zwolle.

VVV Venlo ended their 12-match losing streak against RKC Waalwijk, but were left ruing the missed chance to claim all three points.

The Limburgers came back from 2-1 down to take a 3-2 lead through Vito van Crooij’s looping header with 10 minutes to go. But a handball by top scorer Georgios Giakoumakis, who earlier bagged his 25th of the season, allowed Cyril Ngonge to equalise from the penalty spot.

The other side in the relegation dogfight, Willem II, lost 2-0 to PSV, who took the field without Eran Zahavi. The Israeli striker received a call from the police on his way to the match telling him his wife and children were being held hostage by armed robbers at his home in Amsterdam.

‘It’s terrible what his wife and especially his children had to go through,’ coach Roger Schmidt said after the game, which ensure his team stay a point ahead of AZ in second place. ‘We will give Eran all the support we can. We won this game for Eran.’

A mishap-ridden klassieker between Feyenoord and Ajax completed a full set of away wins on Sunday as the champions-elect ran out 3-0 winners. The match featured two own goals, a penalty miss by Feyenoord’s Leroy Fer and red cards for Edson Alvarez of Ajax and Tyrell Malacia of Feyenoord.

AZ kept up the pressure on PSV by beating Fortuna Sittard 1-0 at home. Albert Gudmunsson secured the points with a first-half penalty, but AZ had to fight a rearguard action in the second half after Ramon Leewin was sent off for a heavy challenge.

Sparta Rotterdam moved into the last Conference League play-off spot with a convincing 3-0 win over Vitesse Arnhem in Het Kasteel. Substitute Emanuel Emegha scored his first goal for the club and marked the occasion by displaying a photograph of former team-mate Ousmane Kone, who died during a team outing five years ago.

Heracles slipped back to ninth as the derby with Twente Enschede ended all square, while Heerenveen’s faint hopes of a top eight finish are effectively over after their goalless draw with Utrecht.