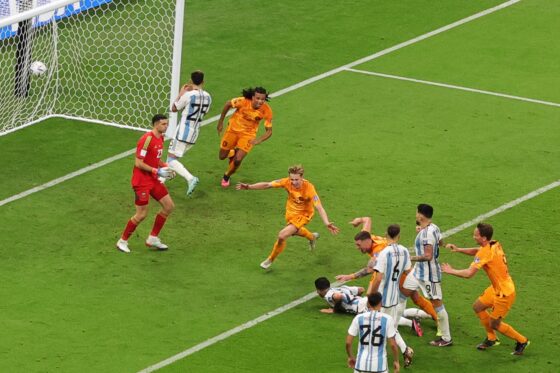 History repeated itself as the Netherlands were knocked out of the World Cup on penalties by Argentina for the second time in eight years, having staged a miracle to recover from 2-0 down in normal time.

Two strokes from the boot of Lionel Messi, a sublime pass in the first half and a penalty in the second, looked to have settled a contest in which the Dutch were unable to mount a meaningful attack for the first hour.

But the introduction of Wout Weghorst and Luuk de Jong as second-half substitutes changed the character of the match, as the Netherlands abandoned their toothless passing game in favour of an aerial assault.

Weghorst scored twice in a chaotic closing period, including an equaliser in the 11th minute of injury time from an ingenious free-kick move, but the curse of penalties once again ended the Netherlands’ dream.

Captain Virgil van Dijk and Steven Berghuis saw their penalties saved by Emiliano Martinez in the Argentinian goal, while Messi and Leandro Paredes made no mistake.

The Dutch nursed hopes of another improbable comeback when Enzo Fernandez screwed the fourth penalty for Argentina wide, but substitute Lautaro Martinez buried the last spot-kick to send his team through to a semi-final against Croatia.

Head coach Louis van Gaal made one change to the starting line-up, replacing Davy Klaassen with Steven Bergwijn, who started up front alongside Memphis Depay with Cody Gakpo in the holding role.

Argentina’s line-up mirrored the three-man Dutch central defence, which meant no place for Angel Di Maria. Former Ajax defender Lisandro Martinez was drafted in to shore up the defensive line.

Chances were few and far between in a cagey first half that slowed to a walking pace at times.

Goalkeeper Andries Noppert almost let in Julian Alvarez early on a stray pass, while Messi’s first surging run ended in a shot from outside the area that flew well over the bar.

More than half an hour had passed before Noppert was called into action, easily gathering a tame shot from De Paul.

Argentina took the lead two minutes later. Messi evaded Nathan Aké and galloped forwards before threading through an inch-perfect pass to the right-back Nahuel Molina, who slipped the ball past the onrushing Noppert.

Van Gaal made two changes at half-time as he sought a more creative approach, with Teun Koopmeiners replacing Marten de Roon in central midfield and Steven Berghuis coming on for Bergwijn.

Argentina had the first chance after the break when Rodrigo De Paul tried to play in Messi on the right-hand side but overhit the pass, allowing Noppert to gather the ball.

Messi, who escaped a yellow card for a clear handball a few minutes later, then won a free-kick on the edge of the area with another darting run, but sent the ball fizzing just over the crossbar.

The failure to muster a single shot on target in the first 65 minutes prompted Van Gaal to bring on Luuk de Jong and switch the formation to 4-3-3, allowing Aké and Timber to push forward on the flanks.

But six minutes later Marcos Acuna completely foxed Denzel Dumfries on the left edge of the penalty area to win a spot-kick that Messi dispatched to Noppert’s left, leaving the goalkeeper rooted to the spot.

Needing the heavy artillery to breach the solid Argentinian defence, Van Gaal sent on Wout Weghorst to replace the fading Memphis on 78 minutes. His gamble was rewarded within five minutes as Weghorst headed in Berghuis’s searching cross from the right.

Two minutes later Berghuis crashed in a shot from Luuk de Jong’s knock-down, but the ball flew past the post and hit the outside of the net.

The Dutch looked to have come up short in 10 frantic minutes of injury-time, until Weghorst was needlessly shoved to the ground by German Pezzella on the edge of the area.

With seconds left on the clock, Koopmeiners flummoxed the Argentinian defence with a pea-roller pass that Weghorst turned in from close range to force extra-time.

Argentina had the best chance in the first period of extra time, but Messi’s free-kick was just too long to connect with the outstretched boot of Nicolas Otamendi.

Substitute Lautaro Martinez could have snatched a winner as the South Americans pressed in the last 10 minutes, but his close-range shot was turned round the post by the chest of Van Dijk.

Two potentially dangerous crosses at the other end by Berghuis and substitute Noa Lang were smartly dealt with by Emiliano Martinez.

Noppert then had to be at full stretch to deny a fierce drive from Lautaro Martinez, before Enzo Fernandez unleashed a shot in the last minute that crashed against the post.

Protester interrupts lecture for the royals by singing ‘Oh Freedom’

MPs call for a curb on international students, more focus on Dutch