Dutch hospitals call for vaccinations for all healthcare staff 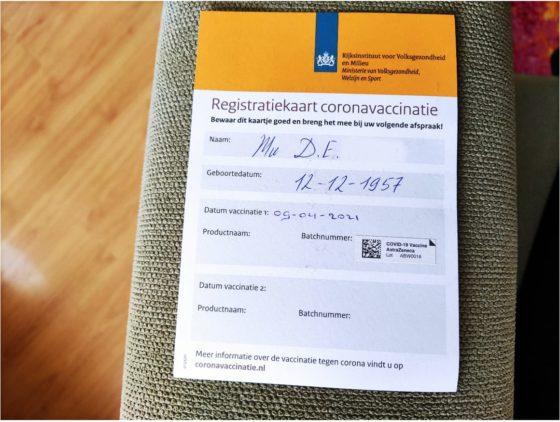 When describing the Covid reality in the Netherlands last week, prime minister Mark Rutte said there were two different worlds: one for those who work inside hospitals and another one for the rest of us. While we on the outside crave normalcy, café culture and festivals, those on the inside, he said, fear a code black of full beds and maximum capacity.

But what healthcare workers in the nation’s hospitals actually fear is not being vaccinated.

‘The problem is not ICU beds and machines,’ says Marc van den Broek, spokesman for Amsterdam’s UMC teaching hospital. ‘Those we have. It’s the staff. They are tired, sick and some even have coronavirus. We want all hospital workers to be vaccinated as soon as possible.’

To date, only 15% to 20% of hospital workers nationwide have been vaccinated. Professionals working exclusively on Covid-19 wards have been vaccinated, but other healthcare workers—from the cardiologist who consults on a Covid patient to a nurse taking the patient’s blood pressure—have not.

‘Most other countries are making it a top priority to vaccinate their healthcare workers,’ says Daniela Stols-Gonçalves, head of the clinical trial unit of the Vascular Medicine Department at Amsterdam UMC. ‘We’re not talking administration here, but people seeing patients every day. My patients ask why I’m not vaccinated. We should be giving them hope, security and certainty, but instead, they’re scared of us. The doctor-patient relationship has changed.’

Fed up with the slow rollout of the Dutch vaccination programme and its lack of priority for hospital workers, Stols-Gonçalves decided last week to petition the government.

She signed onto an already existing petition by Marc Nelissen, director of the Medical Center Wetering in Amsterdam, who was asking for clinic workers to be vaccinated.

With more than 400 independent clinics taking over some of the vital care procedures from overburdened hospitals, including dialysis treatments, Nelissen argued that they, too, should be vaccinated. The joint petition decried the government’s ‘serious failing in its duty of care towards these healthcare workers by not giving them priority vaccination.’

‘We’ve reached our limit,’ says Stols-Gonçalves, who presented her arguments to parliament last week. ‘If healthcare workers aren’t vaccinated and get sick, we won’t be able to replace them.’ Only her urgent trials are still continuing, and it’s ‘just about keeping patients safe now.’ She tests herself for Covid-19 often.

The health ministry had been planning to vaccinate hospital workers under the age of 60 who are in direct contact with patients this week with the Janssen vaccine, but that’s been put on hold until at least the European Medicines Agency weighs in on the vaccine’s safety this week.

While healthcare professionals older than 60 can take the AstraZeneca vaccine, the ministry now says it will vaccinate the under-60s with the Pfizer vaccine should the Janssen jab face further delays.

Hospital workers cannot afford to drop out due to illness, because of the constantly high pressure in hospitals from the third wave,’ the ministry said of its decision to prioritize hospital workers for vaccination.

But that will likely take at least another week, and larger shipments of the Pfizer vaccine are not expected until the end of this month. Healthcare workers say the 35,000 extra expected vaccines, while welcome, won’t come close to covering the country’s 230,000 hospital workers. Some 40,000 have already been vaccinated.

The Dutch have had a dismal vaccination rollout, with delay after delay and bungled distribution strategies. The pauses in the use of AstraZeneca and the Janssen vaccine due to their rare side effects of blood clots and low platelet counts haven’t helped. Like most other European countries, the Netherlands is in part at the mercy of the European Union’s failure to procure enough vaccines early and its subsequent supply problems.

‘There’s nothing to order,’ says Charlotte Menten, of public health institute RIVM. ‘We’re living in the EU, and what we’re getting is divided between all EU countries. We have to wait for what we get.’

But while the countries of Europe may be divvying up supplies from the same vaccine barrel, how they distribute them is strictly a national affair. In the Netherlands, the priority, says Anke Huckriede, a professor at the University of Groningen, was about  saving as many lives as possible, which meant vaccinating the oldest, most vulnerable people first. It’s a strategy, she says, that achieved its goals, with the number of deaths among older people declining.

‘But I would have taken a little different approach,’ she says. ‘I would have identified a few groups to give vaccines to quite early, including teachers and especially health care workers, who keep the system running and deal with vulnerable people and are exposed to the virus. There are arguments for and against different aims, but you must make a choice. The choice worked for their aim.’

With less than 20% of health care workers vaccinated, the Netherlands falls far short of EU recommendations that 80% be vaccinated by March. ‘It seems a bit low,’ says European Commission spokesman Stefan De Keersmaecker, who points out that the EU average is almost 70% for first vaccinations to health care providers.

But that’s based on the 15 countries that have reported their rates to the European Centre for Disease Prevention and Control (ECDC). The Netherlands isn’t one of them, but if it were, it would rank at the bottom, alongside Bulgaria. (‘We had technical difficulties so weren’t able to get the figures to the ECDC,’ says the RIVM’s Menten by way of explanation.)

‘We wanted states to reflect on priority groups,’ says Keersmaecker. On the EDCD website, only the over 80s and healthcare workers are singled out as such, underscoring the urgency of getting them vaccinated. ‘Healthcare workers are essential workers against Covid with a high relative risk of infection. But member states must do their own prioritising,’ he said.

‘This 115% to 20% vaccination rate for healthcare workers is very worrying,’ says Wouter van der Horst, spokesperson for the Dutch Association of Hospitals (NVZ), whose boss Ad Melkert has been lobbying the government for vaccinations for its workers.

‘Everyone is sick and tired of this Covid thing. Hospital personnel, too, want to go out to dinner. But we need to use restraint in the coming months to get to the finish line. Our people need to be vaccinated so they can treat patients, work safely, and eliminate worries about contaminating or hurting patients.’

It’s now been more than a year since the country’s ‘healthcare heroes’ were lauded with applause and bonuses and banners. But to the country’s healthcare workers, those days seem long gone.

‘I have un-vaccinated colleagues who work in emergency rooms with Covid-19 children and then go home to older, sick parents,’ says Stols-Gonçalves. ‘If we get sick, we also have families. And we can’t work from home. We are not heroes. We are human.’