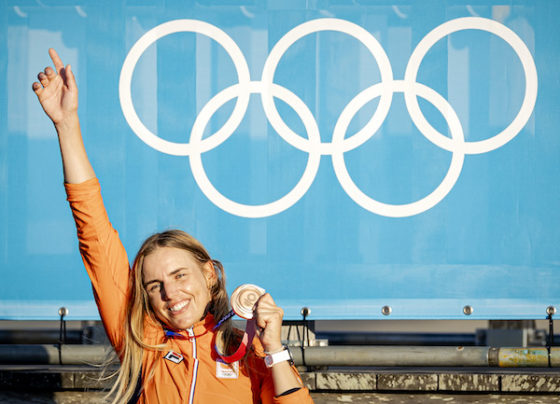 Defending champion Marit Bouwmeester has taken the bronze medal in the Laser Radial sailing event, after finishing sixth in the final, medal race.

Bouwmeester, 33, has won a medal in three successive Olympics – starting with silver in London, followed by gold in Rio in 2016.

The Netherlands now has 17 medals at the Tokyo Olympics with a week of competition to go. At Rio, the Dutch haul totalled 19 while the best Dutch performance was in Sydney in 2000, when the Netherlands won 25 medals, including 12 golds.

Coming up in the second week:

August 2: women’s 5,000 metres, women’s discus, women’s 100 metres hurdles
The Netherlands’ best hope for a track gold, Sifan Hassan is in top form this year and will be hoping to add to her medal haul.

Jorinde van Klinken has an outside chance of a medal in the women’s discus while Nadine Visser will be hoping for a place in the 100 metres hurdles final.

August 6: women’s hockey and football finals, women’s cycling
The Dutch women’s hockey have an impressive record with gold in Beijing, London and then silver in Rio. They are hot favourites for the Olympic title this year.

In women’s cycling, Kirsten Wild and Amy Pieters are strong candidates for a medal in the women’s Madison.

August 8: women’s boxing, handball
Middleweight boxer Nouchka Fontijn is in the ring and hoping to at least better her silver medal won in Rio. And if the women’s handball team have done as well as hoped, that final takes place on the last day of the Olympics.