Brits in the Netherlands frustrated as UK steps out of lockdown 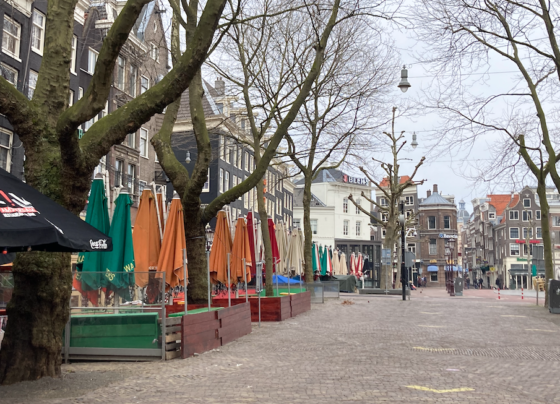 As the Dutch government decides not to reopen pavement cafes, and British pubs do open their doors again, the contrast between the European and UK approaches to the coronavirus crisis could not be clearer.

‘It’s frustrating as a Brit in the Netherlands to watch the UK plow ahead while it seems to be standing still here,’ says Rhian McNeff, a British horticultural company manager based in Utrecht.

She points out that her boss’s 82-year old Dutch mother has still not received a vaccination, while both her own parents in their early 60s received their first dose in the UK two months ago.

Her irritation with the strategy has been compounded by the recent halt to usage of the AstraZeneca vaccine in the Netherlands for a second time over blood clot concerns. ‘It’s very safe, far safer than the contraceptive pill in terms of a risk of blood clots,’ she says.

In Britain, restaurants and bars in outdoor settings, non-essential shops and gyms began reopening their doors to customers on Monday. The return to these activities wouldn’t have been possible without the country’s ambitious vaccination drive that has so far seen approximately 35 million people given a first dose.

It’s a stark contrast to Dutch progress that has resulted in almost four million people receiving their first inoculation to date. Gareth Davies, professor of EU law at Amsterdam’s VU university, says the Dutch government’s vaccine strategy ‘has been very weak in all aspects’ and has suffered from ‘a lack of initiative and leadership.’

Vaccine plans were mired in excessively complex detail and failed to take into account contingencies, he says. In addition, despite the Netherlands being a significant vaccine producer, the government had failed to engage with manufacturers to ensure capacity was sufficiently scaled up prior to campaign launch.

There has also been a lack of ‘serious cost-benefit analysis’, he says, pointing to how vaccinating teachers early would have had a low impact overall, but would have provided long-term benefits of allowing schools to reopen. ‘Generally, the processes of taking policy decisions appear to be slow, bureaucratic, and lack creativity or initiative.’

Although commending the UK government and health service for allowing the country to get to this stage, Davies does believe that confidence in the EU will recover as European countries accelerate their own rollout and awareness increases of Britain’s dependency on the EU for vaccines.

McNeff also finds it hard to compare the Dutch and British approach without involving the European Union, and she shares Davies’ more diplomatic understanding by suggesting things haven’t always been good for the UK through the pandemic.

‘The EU has taken a cohesive approach and I think that’s very important, acknowledging that if one state has a terrible COVID-19 outbreak, it will spread.’

‘The UK has had far, far too many people die. It’s utterly shameful. I don’t think any EU country has seen as many proportional to their population. In the UK press, the success of the vaccine rollout has largely been framed as the positive outcome of Brexit, but this has concealed the trade issues, shrinking UK exports and rising costs of imports’, says McNeff, who works for a company selling plants into the UK.

Charles Stolworthy, a corporate relationship specialist originally from London and now living in Hilversum, emphasises that he would have voted remain in the UK’s Brexit referendum in 2016 if he had been allowed to. Nevertheless, he says, the Dutch pandemic response doesn’t exonerate the European Union’s bureaucratic slowdown.

‘It shouldn’t be hard to vaccinate 17 million people. You take it up the ladder, it’s down to a totally inept EU. There is no union in Europe’, referring to the EU’s often criticised slow action based on member consensus.

‘The only way you overcome this virus is if everyone works together and they’re not. It’s typical of the EU.’

Going for a beer, a shopping trip or just meeting in person with his church congregation are activities he misses. Stolworthy suggests the Dutch evening curfew has been a waste of time that hasn’t stopped young people and students from spreading Covid-19.

The unequal vaccine progress on either side of the Channel also leaves him worried about when he might return to the UK to see his children. ‘If the UK makes progress, the next problem I have is that they will probably say that I can’t go there unless I’m vaccinated and trying to get a vaccine in this country is virtually impossible.’

Rhian McNeff looks forward to receiving the vaccine in the Netherlands, however long that takes. ‘I would really like to get it here though, but I imagine being in my early 30s, that won’t happen until Christmas or later at this rate,’ she says.

Dutch health minister Hugo de Jonge has pledged that everyone over the age of 18 who wants a vaccine will have had at least one dose by early July.