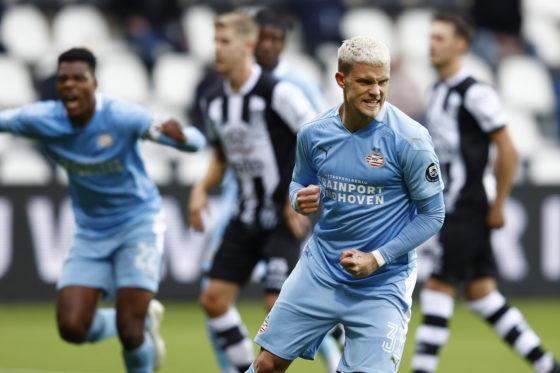 PSV Eindhoven’s first dropped points of the season leave Ajax and Heerenveen as the only teams in the Eredivisie with a 100% record after three matches.

An uninspired PSV needed a penalty early in the second half, converted by Philipp Max, to earn a draw in Almelo. Rai Vloet had put Heracles ahead in the 31st minute, also from the penalty spot.

Coach Roger Schmidt said his players showed signs of weariness after beating Slovenian side Mura 5-1 in the Europa League in midweek. ‘Last Thursday we played very well in Europe and now, three days later on the artificial pitch, it just didn’t click for us,’ he said.

Ajax prevailed against Vitesse Arnhem, another team with two wins in their first two games, despite losing Edson Alvarez to a red card just before half time when the VAR ruled he had left a foo

Former Ajax midfielder Riechedly Bazoer gave his old team more problems when he fired a loose ball past André Onana early in the second half, but Antony settled a combative game with a perfectly measured shot from Mohammed Kudus’s deep pass.

Heerenveen edged past VVV Venlo in a scrappy game that featured two red cards for the visitors and a penalty converted by Joey Veerman for the only goal.

Twente Enschede briefly headed the table after dispatching Groningen 3-1 in the Friday evening game. Vaclav Cerny put the home side ahead with a diagonal shot after 22 minutes before turning provider for Danilo.

Groningen improved after the break and quickly reduced the deficit through Ahmed El Messaoudi, before a late Alexander Jeremejeff header sealed the points for Twente.

Penalties were also prominent in Feyenoord’s 4-2 win over ADO Den Haag, with both teams scoring from the spot, but the game was lit up by Marcos Senesi’s overhead flick from a corner in the second half that put Dick Advocaat’s side 2-1 up.

PEC Zwolle were the biggest winners of the weekend with a thumping 4-0 win over Sparta Rotterdam. Reza Ghoochannejhad scored either side of half-time, after Sparta had been reduced to 10 men with the sending-off of Mica Pinto, while the impressive Yuta Nakayama rounded off the scoring with a header after 71 minutes.

AZ looked to be cruising to victory in Sittard when Myron Boadu put his side 3-1 ahead after 69 minutes, but winger Emil Hansson pulled a goal back before Zian Flemming, who had put Fortuna ahead in the sixth minute, rescued a point for Fortuna with a turn and shot deep into injury time.

Emmen, seemingly energised by the decision to allow the name of club sponsor EasyToys on their shirts, took a fifth-minute lead against Willem II with a goal by Michael de Leeuw. Mike Trésor equalised eight minutes later and the home side settled for a point after Glenn Bijl was sent off in the second half for handling the ball.

RKC Waalwijk are still seeking their first point after going down 3-1 to Utrecht, for whom Gyrano Kerk scored the second goal in possibly his last game for the club. The speedy forward has been linked with Leeds United in England and Italian sides Cagliari and Hellas Verona.