Russia said the swap was carried out in the United Arab Emirates and later U.S. President Joe Biden, who had long pressed the Russian government to free Griner, officially announced her release at the White House.

"She represents the best of America," Biden said, noting that Griner would be back in the United States within 24 hours.

"I spoke with Brittney Griner," Biden said. "She's safe. She's on a plane. She's on her way home. After months of being unjustly detained in Russia, held under intolerable circumstances. Brittany will soon be back in the arms of her loved ones, and she should have been there all along."

Griner's wife, Cherelle Griner, thanked Biden and an array of U.S. officials for their efforts in freeing her spouse after nine months of imprisonment. She vowed that she and Brittney Griner would continue their support for the release of Paul Whelan, another U.S. prisoner held in Russia who was not included in Thursday's deal. 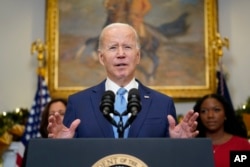 Griner, 32, was detained at a Moscow airport in February when she arrived in Russia with vape canisters containing cannabis oil in her luggage. The Women's National Basketball Association star had gone to Russia to play for a Russian team during her off-season in the U.S. but instead was convicted of the drug charge after a brief trial, sentenced to nine years of imprisonment, and recently sent to a Russian penal colony.

Even as the U.S. has led the Western coalition of countries supplying munitions to Ukraine in its 10-month fight against Russian President Vladimir Putin's invasion, the two countries held behind-the-scenes talks about the release of the two prisoners.

Earlier this year, U.S. Secretary of State Antony Blinken and Russian Foreign Minister Sergey Lavrov talked about the would-be prisoner exchange, at the time their first known contact in more than five months as Moscow's attacks on Ukraine raged on.

In an extraordinary move during otherwise secret negotiations, Blinken revealed publicly in July that the U.S. had made a 'substantial proposal' to Russia for Griner and Whelan.

In the end, Whelan, a 52-year-old Michigan corporate security executive jailed in Russia since December 2018 on espionage charges that his family and the U.S. government has said are baseless, was left out of the deal.

'Sadly, and for totally illegitimate reasons, Russia is treating Paul's case differently than Brittney's," Biden said. "And while we have not yet succeeded in securing Paul's release, we are not giving up. We will never give up.'

Biden promised Whelan's family, "We will keep negotiating in good faith. I guarantee it."

Bout, 55, was serving a 26-year prison sentence in the U.S. and was once nicknamed 'the Merchant of Death.' The Kremlin had long sought his release.

Bout is a former Soviet military translator turned international arms dealer. He was imprisoned for more than a decade after he was lured to Thailand in a U.S. Drug Enforcement Administration sting operation that spanned three continents.

'Viktor Bout, in my eyes, is one of the most dangerous men on the face of the Earth,' Michael Braun, the former chief of operations for the drug agency told CBS News' "60 Minutes" show in 2010.

But Griner's arrest when she arrived in Moscow made her the most high-profile American jailed abroad. Her status as an openly gay Black woman, locked up in a country where authorities have been hostile to the LBGTQ community, infused racial, gender and societal issues into the case. American news outlets regularly televised her court appearances.

Before being sentenced on August 4, an emotional Griner apologized 'for my mistake that I made.'

She told the judge, 'I hope in your ruling it does not end my life.'