HANOI, Nov. 5 (Xinhua) -- In a city crowded with millions of motorbikes and cars, some commuters are longing for alternatives to traffic.

Nguyen My Linh, 25, a graduate student at Vietnam National University in Hanoi, shuttles between home and campus by the Cat Linh-Ha Dong elevated railway, the first metro line in the Southeast Asian country, which started operating one year ago.

With a smaller size and without fixed routes, a motorbike should have been more convenient than a bus or metro, but in Hanoi's streets and alleys, motorbikes may be too many. Linh often found herself stranded in heavy congestion in the main street in front of the campus gate at rush hour. Also, strong wind, rain and other rider-unfriendly weather bring risks.

Like many other capitals, Hanoi sees a large number of passengers, mostly workers and students, at rush hour, and serious traffic congestion and environmental pollution, which necessitate developing the railway system, said Vu Hong Truong, CEO of Hanoi Metro, a state-owned enterprise for railway operation and maintenance.

Built by the China Railway Sixth Group (CREC) and as an important project of the synergy of China's Belt and Road Initiative with Vietnam's "Two Corridors and One Economic Circle" plan, the Cat Linh-Ha Dong line, more than 13 km with 12 stations covering three districts in Hanoi, has transported around 7.2 million people since last November.

With a designed speed of 80 km per hour, each train has four carriages capable of carrying up to 1,000 people. Local newspaper Vietnam News reported Thursday that on average 32,000 passengers daily take the line, and 70 percent of them use monthly tickets.

For Linh, her entire journey between the two ends of the line takes 23 minutes, nearly an hour faster than a car trip and 20 minutes faster than motorcycling.

"Taking these trains, I will no longer have to worry about congestion every morning while going to work," Hoang Thi Huong, 30, from Hanoi's Thanh Xuan district, told Xinhua. Huong hopes that more urban railway projects will be constructed to ease traffic jam in the city. 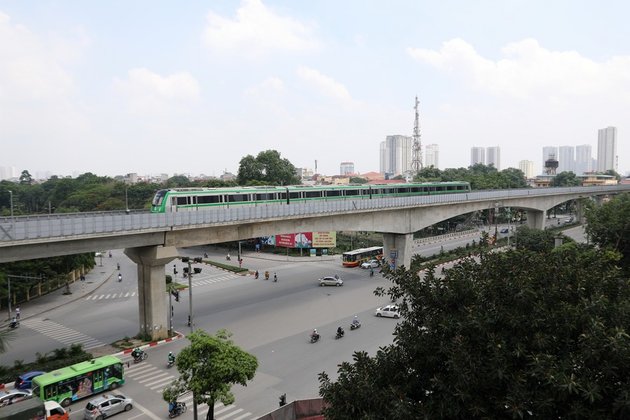 For urban planners, the line means more. Especially for a city with some 6.5 million motorbikes and more than one million cars.

At its inauguration ceremony in January, Vice Chairman of the Hanoi People's Committee Nguyen Manh Quyen said that under a city development plan, Hanoi will have a total of 10 urban railway routes by 2030, which are expected to help local people survive the rush hour.

The Cat Linh-Ha Dong line has boosted capacity of the city's public transport, which has met over 30 percent of locals' travel demand with an aim of 35 percent by 2025, deputy director of Hanoi Public Transport Management Center Thai Ho Phuong said earlier this week.

Following a year of official operation, the line has proved that it is safe, said local transport expert Le Trung Hieu, adding that local authorities have become more experienced in urban railway management and operation.

Many people have put aside their motorcycles and started to take the metro, said Tang Hong, general manager of Overseas Company of the CREC, adding that Chinese technology, manufacturing and standards have won Vietnam's trust. 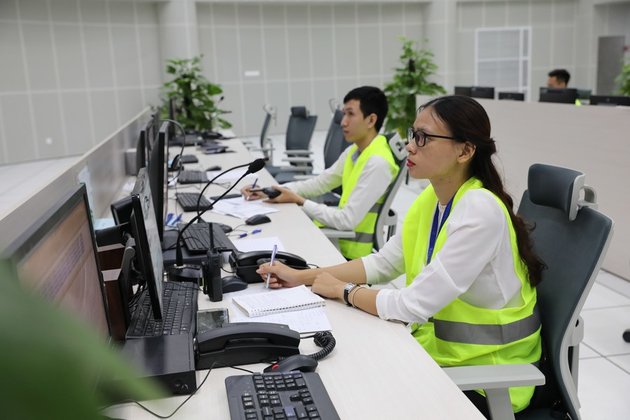 Built by China and run by Vietnam, the Cat Linh-Ha Dong line has demonstrated how the two countries are pushing forward practical cooperation. And the pair are eyeing for more results, for example in the area of people-to-people exchanges.

In 2019, some 160 Vietnamese trainees took part in a drill for the operation of the metro line, including large passenger flow management, rescue of failed trains and emergency response at stations.

On the final day of the one-month drill held by CREC and Shenzhen Metro, Ha Van Trong, a Vietnam Railway College graduate and a metro driver, said he was sent to Beijing with other Vietnamese drivers to learn how to drive electric-powered trains from 2014 to 2015, and he and his colleagues felt confident about driving safely, whether using the automatic mode or the manual one.

As Chinese President Xi Jinping once said, the two countries should seize the opportunity to enhance the level of exchange and cooperation, so that the people of both countries can have more of a sense of fulfillment and happiness.

In 2017, during Xi's state visit to Vietnam, a Memorandum of Understanding (MOU) on the joint implementation of the China-proposed Belt and Road Initiative and Vietnam's "Two Corridors and One Economic Circle" plan was signed. Since then, on various occasions, leaders of the two countries have stressed promoting the synergy of the two development initiatives and practical cooperation in various fields.

With joint efforts, bilateral cooperation has seen steady progress. China has remained Vietnam's biggest trading partner and the second largest export destination, while Vietnam has continued to be China's biggest trading partner in the Association of Southeast Asian Nations. Statistics of China's customs showed that the two countries' trade increased by 19.7 percent to 230.2 billion U.S. dollars in 2021, the first time in history surpassing the 200-billion mark.

The past years have also witnessed growing friendship and mutual understanding between Chinese and Vietnamese people. An increasing number of Chinese films and TV series have gained popularity in Vietnam, while the flourishing bilateral ties have attracted more and more Vietnamese students to study and work in China.

On Monday, leaders of the two countries agreed to futher promote bilateral cooperation.

China is ready to work with Vietnam to synergize their development strategies, promote connectivity between the two countries, and deepen cooperation on health care, green development, the digital economy and climate change, Xi said while meeting with visiting Nguyen Phu Trong, general secretary of the Communist Party of Vietnam Central Committee.

For Ha Van Trong, the metro driver back in Hanoi, the Cat Linh-Ha Dong railway not only provides him with career opportunities but also makes his life easier.

"I believe that the knowledge and skills we acquired in China, plus the in-depth training and various drills in Vietnam, will ensure the effective and safe operations of the railway," he said.