There is a saying about the south-western Chinese province of Guizhou: “Not three feet of flat land, not three days without rain, not a family with three silver coins.” But, with the help of a spicy condiment, Tao Huabi, also known as China’s “hottest woman”, has well and truly defied this rule.

Tao Huabi is the woman behind Lao Gan Ma Spicy Chilli Crisp, a hot, crunchy sauce of chopped chillies that are fried to a red so dark it is almost black. The name means “old godmother” and everyone who picks a jar up must face the stern look of a short-haired woman. Open it, and you find the formidable combination of the odd peanut, a few crunchy, salty soya beans, MSG, and oil so infused with the chilli that it seems to glow. It looks almost dangerous.

Lao Gan Ma, iconic in China, is increasingly appearing in cupboards and fridges in the rest of the world. It is so popular in fact that Tao Huabi is worth far more than three silver coins. Forbes China estimates her fortune at $1.05bn.

Born in 1947, the eighth daughter of a poor family in a village of mountainous Guizhou, Tao did not go to school and did not learn to read or write. She spent her childhood hungry, and survived the Great Chinese Famine by eating plant roots, according to a biography in What’s On Weibo. When her husband died, she moved to the city of Guiyang and started selling noodles with a sauce that she made herself. She eventually opened the charmingly named Economical Restaurant in the 1990s. When a new highway brought truck drivers to Guiyang, she gave them free jars of the sauce and they spread the word. In 1996, she set a factory up in a house in Guiyang, and a year later Lao Gan Ma Special Flavour Foodstuffs Company was born. 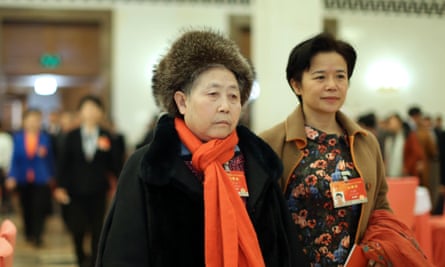 Miranda Brown, professor of Chinese studies at the University of Michigan, who is writing a book on the history of Chinese food, says that in China, Lao Gan Ma’s popularity is partly due to Tao’s authenticity. Chinese consumers tend to want foods that perfectly encapsulate regional cuisines and use ingredients grown from the soil of those regions. Tao’s look and godmotherliness, she suspects, also satisfy a nostalgia for socialist China and a “simpler time”.

Lao Gan Ma’s “kitschy communist” branding “isn’t really new China, even though of course, the story is new China”, Brown said. Even Guizhou’s lack of “three feet of flat land” has been to her advantage: it is on steep land that “new world foods” like chillies grow best, says Brown.

In China, chilli crisp goes with everything. Unlike ketchup, that list can even include ice-cream. The brand is also ubiquitous, spawning Lao Gan Ma phone cases, clothing, pencil cases and the joke, according to state-owned financial news organisation Yicai China, that when a man gets married, it is to two women: his fiancee and Tao Huabi.

The product is so popular that in 2016, Bloomberg credited Lao Gan Ma with helping the historically poor Guizhou achieve 10.5% growth – the second fastest of every Chinese province that year, and ahead of the national rate of 6.7%. 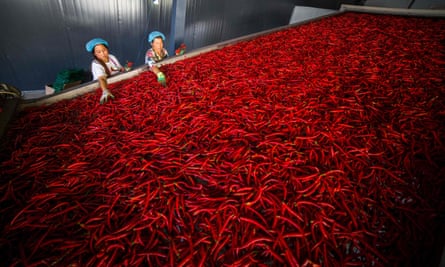 But Lao Gan Ma is also increasingly popular overseas, especially in the US, where several boutique versions have popped up in recent years, including Fly By Jing and Momofuku chilli crunch, both of which ditch MSG in favour of natural flavours. Both are several times the price of Lao Gan Ma, which sells for around US$2 a bottle in China.

A research paper on the condiment, produced by two academics at the Guangdong University of Foreign Studies in Guangzhou, credits its overseas success to Tao Huabi, the face that launched a billion mouthfuls. “Lao Gan Ma deliberately places an extraordinary average-looking and old Chinese female on its product package, which conversely arouses strong curiosities of foreign consumers,” it says.

In 2021, as people looked for a way to make their home-cooked meals more exciting during pandemic lockdowns in the UK, online retailer Sous Chef said Lao Gan Ma sales were up 1,900%.

As for the godmother herself, an article in Yicai Global depicts her as the Queen of a “red kingdom” of chilli fields and a factory where, it claims, she sleeps in a bedroom that leads on to her office.

“The red colour embodied in chilli can be found almost everywhere in the compound,” according to the article. Tao drives a limited edition Rolls-Royce with red rear view mirrors and a lucky number licence plate: “Gui A8888”.