The number of people in the United States who speak a language other than English at home tripled between 1980 and 2019, according to the U.S. Census Bureau. Almost 68 million people who live in the U.S. - about 1 in 5 - speak a second language at home. That number was 23 million in 1980.

"It says what the country is known for, it's a melting pot," says Dina Arid, a California mother of three who grew up also speaking Arabic at home. "So, it's good that it's not just primarily English. There's a bunch of immigrants here."

Arabic is one of the five most-spoken second languages in the U.S. Arid, who speaks mostly English to her children, is trying to teach them a little Arabic.

"Growing up honestly, I had cousins who didn't get to learn Arabic as I did and they always kind of, not resented their parents, but who always wished that their parents spoke to them in Arabic more so that they have that language," she says.

FILE -- Koloud 'Kay' Tarapolsi points to a mask holder made by her daughter that has the phrase 'To Your Health' written in Arabic on it, at her home in Redmond, Washington.

The other languages in the top five are Chinese, Tagalog and Vietnamese.

"My parents also spoke English at home but they really tried to keep it, like I would speak English at school during the day and at night I would only speak Vietnamese just so I could keep the language and keep my proficiency at it up and not lose it," says Jenny Nguyen, a Virginia dental student, whose parents emigrated from Vietnam. "When I was younger, I didn't understand the importance, but I think now I'm very glad that I'm able to speak and write at such a proficient level."

She was able to put her language skills to use when she traveled to Vietnam to offer free dental care to poor and underserved communities. Many of her peers were also Vietnamese Americans.

Chinese, Vietnamese, Tagalog and Arabic speakers were more likely to be naturalized U.S. citizens than to not have U.S. citizenship at all, according to the Census Bureau. 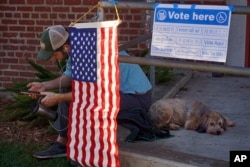 Raymond John "R.J." Mosuela, a Virginia health care recruiter whose parents are from the Philippines, can't speak their native language, but says he understands when spoken to.

Passing his parents' native culture along to his children is important to Mosuela.

"When I eventually get married and have kids, maybe not teach the language but at least like preserving the food and our own cultural traditions," he says.

"The funny thing is that my dad, who is white American, also speaks Chinese," Erway says. "And so my parents would speak in Chinese to themselves when they didn't want the kids, me and my brother, to hear what they're saying. So, they treated it as this like secret language."

While more people than ever are speaking a second language at home, the Census Bureau reports that the number of people who spoke only English at home also increased - by about 25% - from 187 million in 1980 to 241 million in 2019.