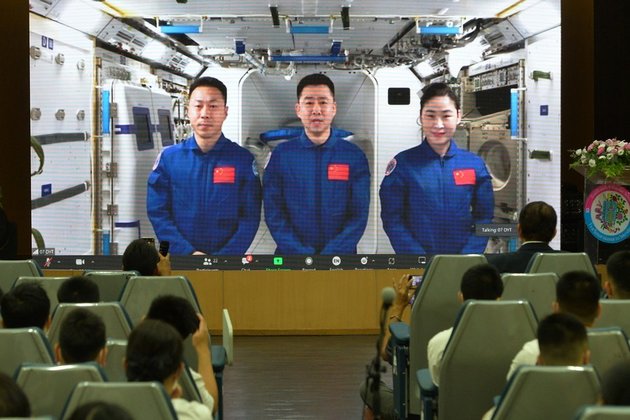 Students from ASEAN countries had a conversation via a video link with three Chinese astronauts now in China's Tiangong space station for a six-month mission in orbit.

BANGKOK, Nov. 3 (Xinhua) -- Thai student Siwattin has never felt so close to his dream of being an astronaut when he had a chance to talk to three Chinese taikonauts in space.

The 13-year-old boy was one of the students from member states of the Association of Southeast Asian Nations (ASEAN) who had a conversation via video links on Tuesday with three Chinese astronauts now in China's Tiangong space station for a six-month mission in orbit.

He raised questions such as how astronauts drink, eat and sleep in space, while the Chinese astronauts Chen Dong, Liu Yang and Cai Xuzhe gave their answers patiently.

"It's inspirational and unforgettable. It's my dream to become an astronaut. The unique opportunity to talk with taikonauts makes me feel closer to achieving my dream," the middle school boy told Xinhua.

Thanks to the program known as "ASEAN Students Talk with Taikonauts," hundreds of students from China and ASEAN countries such as Brunei, Malaysia, Myanmar, Philippines, Thailand and Vietnam asked questions ranging from whether astronauts can surf the internet in space and what happens if they get sick, to how to become an astronaut and what the most impressive thing in space is.

"We have a water distributor and convection heater. We can drink boiled water and eat fresh food," the astronauts responded.

"Though we experience sunrise and sunset every 90 minutes, we still sleep for seven hours at night with Beijing time."

When asked about how many hours of training it took for a female astronaut to have a chance to work in space, Liu Yang, the only woman astronaut of the three, said, "The training standard for man and woman astronauts is the same, and for women, we need to work harder. It takes several years before going for a space mission."

"The earth is the most beautiful scenery I've seen in space," she added. 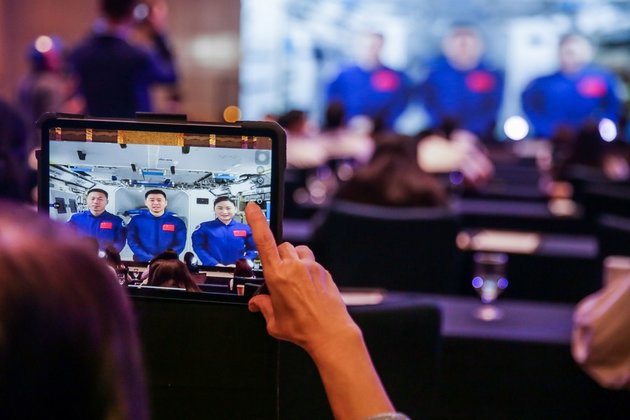 Pasit Lorterapong, deputy permanent secretary of the Thai Ministry of Higher Education, Science, Research and Innovation, thanked China for sharing such a rare opportunity of "talking with astronauts" with Thailand, which will inspire more Thai students to pursue their dreams of space.

There was no such event before, the Thai official noted.

The National Astronomical Research Institute of Thailand and Princess Sirindhorn AstroPark are hubs for astronomical research and development for Thailand and Southeast Asia, according to Pasit.

"All these agencies are working closely with space agencies in China. There are huge opportunities for youth in our country," he said.

Thanapant Raicharoen, a senior executive of Thailand's National Broadcasting and Telecommunications Commission, told Xinhua that the event helped inspire youth and encouraged them to explore space.

"We encourage the youth to study space technology and cultivate more astronauts," he said.