The Taliban escalated its nationwide offensive in Afghanistan on Sunday, launching renewed assaults on three major cities and rocketing a major airport in the south amid warnings that the conflict is rapidly worsening.

As Afghan government forces struggled with a resurgent Taliban following the withdrawal of US-led foreign forces, hundreds of commandos were deployed to the economically important western city of Herat while authorities in the southern city of Lashkar Gah called for more troops to rein in the assaults.

The Taliban struck Kandahar airport in southern Afghanistan with at least three rockets overnight, the insurgent group’s spokesman said on Sunday, adding that the aim was to thwart air strikes conducted by Afghan government forces.

“Kandahar airport was targeted by us because the enemy were using it as a centre to conduct air strikes against us,” Zabiullah Mujahid, a Taliban spokesperson said. Afghan government officials said the rocket attacks forced authorities to suspend all flights and the runway was partially damaged.

The facility is vital to maintaining the logistics and air support needed to keep the Taliban from overrunning the city, while also providing aerial cover for large tracts of southern Afghanistan.

Officials say the Taliban see Kandahar as a major strategic focus for their efforts amid the suggestion that the Taliban would like to use it as a temporary capital in the south.

In the country’s west Afghan officials acknowledged that the Taliban had gained control of strategic buildings around Herat city, forcing civilians to remain in their homes.

On Sunday, the ministry of defence said that hundreds of commandos had been sent to Herat to help beat back the insurgent assault.

“These forces will increase offensive operations and suppress the Taliban in Herat,” the ministry tweeted.

It has been Lashkar Gah, the capital of Helmand province, however, which appears the most vulnerable.

Heavy clashes between the Taliban and government forces were continuing inside the city on Sunday, with militant fighters described as being only a few hundred metres from the governor’s office on Saturday amid Afghan and US air strikes on Taliban positions.

“Fighting is going on inside the city and we have asked for special forces to be deployed,” Ataullah Afghan, head of Helmand provincial council, told AFP.

“The city is in the worst condition. I do not know what will happen,” said Halim Karimi, a resident of the city of 200,000 residents.

“Neither the Taliban will have mercy on us, nor will the government stop bombing.”

The Taliban have been advancing in Afghanistan following the withdrawal of US and NATO troops from the country and in recent weeks the fundamentalist Islamist group said they have captured over half of all Afghanistan’s territory, including border crossings with Iran and Pakistan. 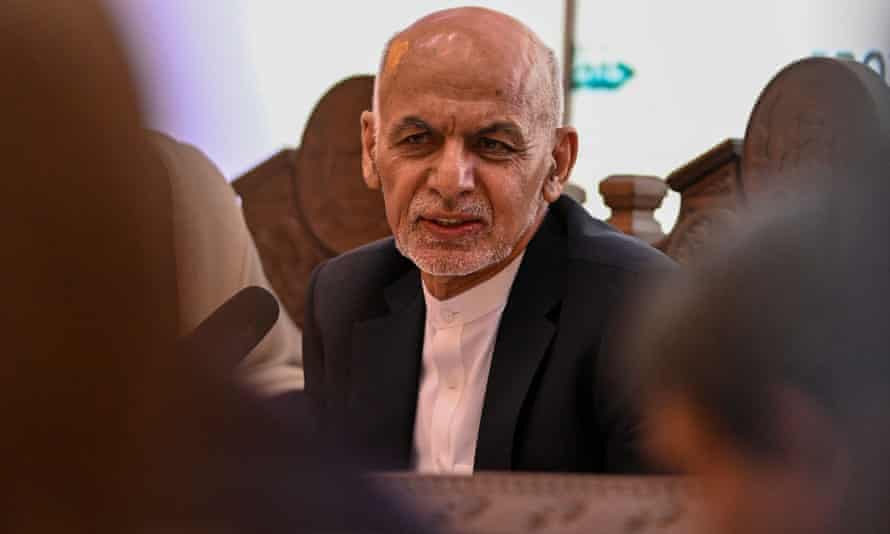 President Ashraf Ghani at a meeting in in the presidential palace on Wednesday. Photograph: Sajjad Hussain/AFP/Getty Images

The current focus of the Taliban’s efforts appears to be a number of key provincial capitals, not least in the country’s south, with the hope that the fall of Kandahar or Lashkar Gah would rapidly topple the five surrounding provinces.

The capture of any major urban centre would take their current offensive to another level and fuel concerns that the army is incapable of resisting the Taliban’s advances.

As fighting raged, President Ashraf Ghani again slammed the Taliban for failing to marshal their negotiating power to reach a peace deal.

“We want peace but they want us to surrender,” Ghani said at a cabinet meeting.

The government has repeatedly dismissed the militants’ steady gains over the summer as lacking strategic value but has largely failed to reverse their momentum on the battlefield.

The Taliban have seized Afghan cities in the past but have managed to retain them only briefly.

The insurgents overran the northern city of Kunduz in 2015 and 2016, and briefly held control of Ghazni after setting ablaze key government buildings and destroying telecommunication towers.

PSG, greetings from Balashikha. We placed your messages on billboards around the Parc des Princes field
Juventus is 10 points behind the leading Napoli after 4 rounds of Serie A
Tiago will not play for Liverpool with Norwich and Brentford due to a calf injury
Oh, shit! And they want to play for Juve? Allegri swore after the match with Milan
Watzke on Holand's departure: Before the start of the season, they said that he would definitely leave us, but he is still here
Roy Keane: Tottenham were so bad against Chelsea that I couldn't believe it. Players don't want to defend themselves
Ancelotti about the World Cup every 2 years: Let's hold it every year, since this is the case

'No sneakiness!' Ben Wallace insists Boris' submarine deal was 'not behind France's back'