This was definitely not the most thrilling Test match the British & Irish Lions have ever played and the outcome also fell a long way short of expectations. At half-time they led 9-6 and were within touching distance of an unbeatable 2-0 series lead. Forty minutes later it was the Springboks who will be licking their lips in anticipation of the third and final Test in this same arena.

No arguments here, no pressing need for Rassie Erasmus to do any more webinars. South Africa were deserved winners, their second-half forward dominance as significant as the Lions’ failings beneath the high ball and with ball in hand. Their two second-half tries from Makazole Mapimpi and Lukhanyo Am added a slick of gloss to the scoreboard but, ultimately, it was the failure of the Lions to impose their own game on pumped-up opponents that will be the abiding memory of a frequently disappointing spectacle.

For long periods this was effectively trench warfare in sponsored kit. The first half lasted almost 63 minutes, long enough to make anyone ponder if rugby’s law book might benefit from some judicious pruning. Any new sport fans taking a break from the Hundred would have been initially impressed by the commitment of both sides but attacking highlights were scarcer than occupied seats.

It was a massive result, either way, for Erasmus, who may now consider that his very public highlighting of refereeing errors in the first Test bore fruit. This time around the New Zealand referee, Ben O’Keefe, ruled with an iron first and virtually all the marginal calls went the way of South Africa.

On another day both Cheslin Kolbe and Faf de Klerk might have seen red for crass challenges on the Lions scrum-half Conor Murray, but ultimately a solitary yellow card for the former was the only punishment that resulted.

On any number of other fronts, too, the Lions will be deeply frustrated. Big games are not meant to be pretty but rare are the successful Lions teams who play scarcely any rugby at all.

Had there been a crowd it would have been the ultimate pressure-cooker; even without any spectators it was still tense enough for both sets of players to hug each other that little bit closer during the anthems.

The opening quarter was similarly tight, with space virtually nonexistent, but the Lions would not have been overly displeased. The first four minutes were fraught, with the Boks camped in their opponents’ 22, but the upshot was just three points to the hosts. Slightly more fun was the little bit of niggle started by Alun Wyn Jones which culminated in a prolonged macho stare-off between the Lions captain and Eben Etzebeth.

Two Dan Biggar penalties also boosted spirits and the exit of Pieter-Steph du Toit, feeling the effects of a heavy early tackle from Duhan Van der Merwe, plus a missed Handrè Pollard penalty added to the growing weight on Bok shoulders. It was an untimely miscalculation, in every sense, when Van der Merwe stretched out a leg with the ball long gone and tripped Kolbe to earn a deserved yellow card. 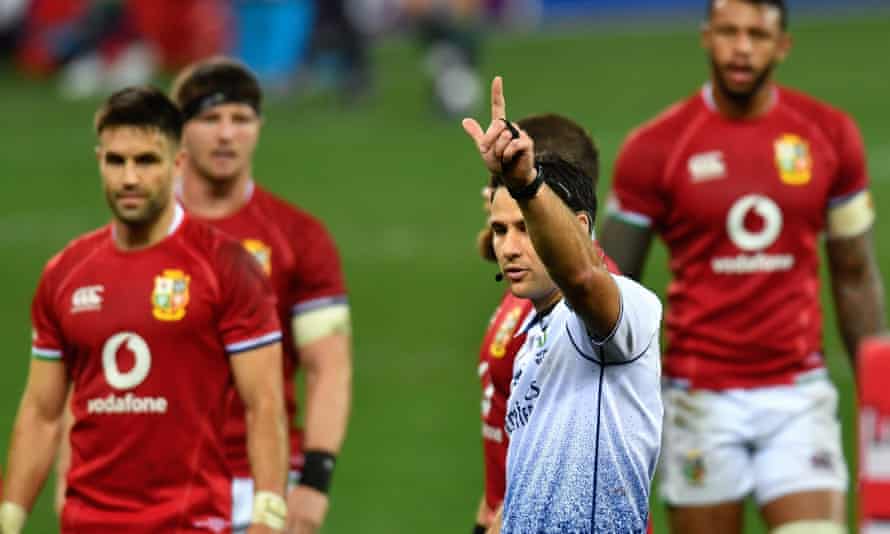 The referee, Ben O’Keeffe, ruled with an iron fist and many of the marginal decisions went South Africa’s way. Photograph: Ashley Vlotman/Sportsfile/Getty Images

South Africa, though, were not thinking too straight either. Whether Kolbe was dazed from an earlier collision or not, he badly mistimed his leap with Murray in the air and brought the Irishman crashing down head first. What would Jaco Johan make of this one? The decision was yellow but red cards have been shown for less.

The rest of the first half was more gristle than prime fillet: rugged and uncompromising but in desperate need of a flash or two of quality. Pollard’s long equalising penalty to make it 6-6 was a rare exception but then came the two incidents, both of which went against the Lions, which had a major impact on the contest.

For all the world it looked as if Robbie Henshaw had scored when he rose high to claim Murray’s chip next to the posts and seemed to come down with it, only for Siya Kolisi to insert an arm between the ball and the turf and satisfy the TMO that there was no touchdown. Somehow, in all the excitement, the officials did not call for a second angle on the clear head hit by De Klerk on Murray half a minute earlier, which represented perhaps the biggest Springbok reprieve of all.

The Breakdown: sign up and get our weekly rugby union email

Biggar, nevertheless, chipped over his third penalty to give his side a 9-6 lead at the interval and put the onus on the Boks to respond. It took them only four minutes to do so, Pollard readjusting cleverly before floating a lovely cross kick left towards Mapimpi, who cut back past the cover to register his 15th try in 16 Tests. Pollard missed the conversion but the Lions’ failure to deal with a couple of high balls in the buildup was still glaring.

Life might also have been easier had Biggar not struck a post with an angled penalty, having opted not to kick for the corner. Little did they realise it would be their last chance of the game, South Africa’s bench proving far more effective than in the first Test. The extra momentum was immediately rewarded, this time when Am was quickest to react to De Klerk’s little chip and touched down just inside the dead ball line. Pollard’s conversion made it 18-9, leaving the Lions to rue what might have been. Only twice have the Lions lost a series having taken a 1-0 lead; they will now have to work hard to avoid the most painful fate of all.

Juventus is 10 points behind the leading Napoli after 4 rounds of Serie A
Tiago will not play for Liverpool with Norwich and Brentford due to a calf injury
Oh, shit! And they want to play for Juve? Allegri swore after the match with Milan
Watzke on Holand's departure: Before the start of the season, they said that he would definitely leave us, but he is still here
Roy Keane: Tottenham were so bad against Chelsea that I couldn't believe it. Players don't want to defend themselves
Ancelotti about the World Cup every 2 years: Let's hold it every year, since this is the case
Ronaldo lost 288,000 euros due to the fraud of a travel agent with the player's credit cards

Beto O’Rourke isn’t the best candidate. Here’s why we need him to stand for governor of Texas anyway

'We've got nothing left to give': A day in the life of a Manchester GP battling huge demand, a new appointments system and vile abuse

My newborn baby was trolled by vicious strangers who called him fat, ugly and ‘bug-eyed’, I’ve never been so angry