Celtic and Ange Postecoglou need a result from somewhere to ensure any ill feeling from their Champions League exit in midweek doesn't continue.

Fans are expecting much better in the capital this afternoon after they crashed out to Danish side Midtjylland on Wednesday.

But they travel to Hearts who are just starting to build a slight head of steam going into their Premiership return.

Robbie Neilson's Jambos are back in the top flight with Craig Gordon stringing together clean sheets =it only illuminates the issues at his former club.

Celtic at their pomp have often found Tynecastle a fearsome place to go and there's no reason to think this game won't deliver thrills and spills aplenty.

Postecoglou has more options than he did in Denmark with Carl Starfelt and Nir Bitton back and could there be a shock appearance for Kyogo Furuhashi?

Neilson and his men are still licking their wounds from the Scottish Cup Final last season so expect plenty of endeavour from both teams.

Stick with us for all the thrills and spills from Edinburgh. 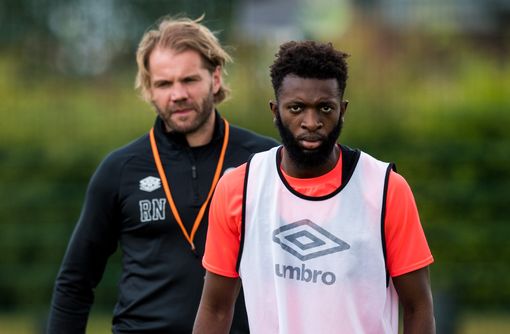 New Hearts signing Beni Baningime is ready for his Tynecastle debut if called upon tonight.

The midfielder joined from Everton on Thursday and Robbie Neilson could throw him straight into the fold against Celtic.

Baningime can't wait to get started and is up for the task against Ange Postecoglou's men.

This is a big game as well so hopefully I can use the experience that I had there.

I’m excited. What a game to begin with. I’m fit and ready to go if the manager selects me.

Celtic supporters will hold a protest outside of Celtic Park ahead of their first home league match against Dundee.

Numerous Celtic supporters group will unite to let the Parkhead board of their ongoing anger fresh after their latest European setback.

Celtic were knocked out of Champions League qualifying by Midtjylland to make it four years on the spin they have failed to dine at European football's top table.

They will now face Czech Republic side FK Jablonec in Europa League qualifying.

Confident Ange Postecoglou is adamant he can win the title back for Celtic in his first term.

The Australian manager gets his opening taste of the Premiership when taking his side east to face Hearts at Tynecastle.

Postecoglou has been written off by some in terms of capturing the flag with a host of factors against him.

The new gaffer has to overcome a 25-point deficit to Rangers from last season and also attempt to rebuild an entire squad in the process. But fired-up Postecoglou remains convinced he can overcome the odds and lead the club to title glory.

I really believe with the group of players we have and the additions we’re going to bring in we’ll, hopefully, get off to a good start in the league. And I’m very confident we’ll be challenging for honours at the end of the year.

Scottish football has always been the best entertainment show about so it seems apt it finally lands a primetime Saturday night TV slot.

Forget dancing and singing - the beautiful game north of the border is what is really worth shouting about.