Have some guts! Guy Verhofstadt urges EU to punish Poland in sly dig at 'failing' VDL

The Belgian MEP shared a tweet by the European Court of Justice celebrating European Day of Justice today. In doing so, Mr Verhofstadt took the opportunity to remind Brussels that instead of celebrating, EU chiefs should better act against member states who breach the rule of law.

In a sly dig at the European Commission President, who last week backtracked from her promise to trigger a punishing mechanism against Poland and Hungary, Mr Verhofstadt said: "It's my party and I'll cry if I want to…

"Instead of celebrating the European Day of Justice the Commission and Council can better act… in Poland, Hungary and against all threats to justice and the rule of law.

"The instruments exist, only the courage among leaders is failing!"

Speaking to reporters after a two-day Council summit, she said: “The European Court of Justice has to judge on a request from Hungary and Poland, whether this conditionality mechanism is legally sound."

Poland is trying to fight an EU mechanism introduced in December which allows Brussels to withhold EU funds if a member state is in breach of the rule of law. 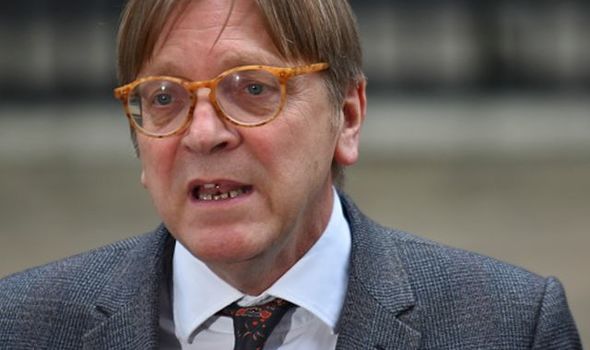 Guy Verhofstadt is urging the Commission to punish Hungary and Poland over rule of law breaches (Image: GETTY)

Warsaw joined forces with Budapest earlier this month requesting a hearing of the European Court of Justice against the bloc's provision.

Officials expected the EU Commission to trigger the mechanism in the past weeks.

The bloc's executive could trigger the policy if it has concerns over rule of law shortcomings that could affect the management of the EU budget, such as a lack of independence of national courts from their governments.

Sylwia Żyrek, a lawyer representing the Polish government, argued the mechanism was not "conditional" in nature, but "it’s a mechanism to impose a sanction".

Miklós Zoltán Fehér, a senior official from the Hungarian Ministry of Justice, added that the mechanism is a “political procedure with the political intent.”

The move from Poland and Hungary comes despite Poland's Constitutional Tribunal saying two weeks ago in a ruling that parts of EU law are incompatible with the constitution.

In an interview with the Financial Times on Sunday, Polish Prime Minister Mateusz Morawiecki said the EU was putting a "gun to our head".

He added: “What is going to happen if the European Commission will start the third world war?

"If they start the third world war, we are going to defend our rights with any weapons which are at our disposal."

Brussels is currently withholding recovery funds against Poland until the dispute is resolved.

But the Polish leader said: “We will get this money sooner or later.

"The later we get it, the stronger the proof that there is this discrimination treatment and diktat type of approach from the European Commission.”

Speaking at a press conference in Brussels after a European Council summit last week, where Poland's adherence to rule of law was discussed, Mr Morawiecki said his country has no problem with the rule of law. 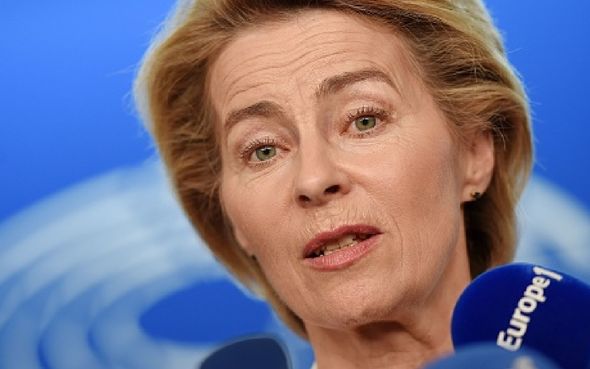 EU news: Von der Leyen said no measures will be taken against Poland and Hungary for now (Image: GETTY)

He added that the European Union has large competencies but these were not boundless, and that the bloc could only function within those assigned competencies.

French President Emmanuel Macron said on Friday that Europe was waiting for "concrete gestures" from Poland to solve the current spat with the European Union over the independence of the Polish judiciary.

Earlier this month, Poland's Constitutional Tribunal ruled that elements of EU law were incompatible with the country's charter, challenging a central tenet of EU integration.

Speaking at the end of her last EU summit, German Chancellor Angela Merkel said EU countries need to deepen talks about where the 27-nation bloc should be heading to in order to mitigate and solve disputes such as the current row with Poland.

She told reporters: "There is the issue of the independence of justice, but also underlying (the question) ... which way is the European Union heading, what should be a European competence and what should be tackled by nation-states.

"If you look at Polish history, it is very understandable that the question of defining their national identity plays a big role..., which is a different historical situation than the one countries find themselves in that have had democracy since World War 2."

EU leaders lined up to chastise Warsaw last week for challenging the EU's legal foundations, but Poland's premier said he would not bow to "blackmail".

Mr Morawiecki said he was ready to resolve disputes with Brussels, though many are worried that a stubborn ideological rift between eastern and western Europe poses an existential threat to the EU itself.

Long-running tensions between Poland's ruling nationalists and the bloc's liberal majority have spiked since Poland's Constitutional Tribunal ruled this month that elements of EU law were incompatible with the country's charter, challenging a central tenet of EU integration.

The dispute not only risks precipitating a new fundamental crisis for the bloc, which is still grappling with the aftermath of Brexit.

It could deprive Poland of generous EU handouts.

"Some European institutions assume the right to decide on matters that have not been assigned to them," Mr Morawiecki said as he went into the talks, which come two days after the executive European Commission threatened to take action against Warsaw.

"We will not act under the pressure of blackmail ... but we will of course talk about how to resolve the current disputes in dialogue."