A fireman found his daughter dead after being called to a car crash in Wales this weekend.

Ella Brooke Smith, 21, was discovered by firefighter dad Adrian, 47, next to her seriously injured boyfriend, when his crew were called to the three-car pile-up which left two others injured.

The trainee nurse – credited with ‘always bringing a bright ray of sunshine into our lives’ – was travelling back from the seaside in a white Ford Ka after a day out in Broadhaven, Pembrokeshire, on Sunday.

She had said goodbye to her parents just hours earlier at her home in nearby Camrose, before tragedy struck on a country road.

Mr Smith was on shift with his firefighting crew and arrived to see that the car had overturned on a bend and was then struck by two other vehicles on the B4341 at around 8.25pm.

Police said Ms Smith died at the scene and three others were seriously hurt. It is understood that another car hit the passenger side where she was sitting, with police saying a blue Citroen C1 and a white Seat Ibiza were the other two cars involved.

Two men and a women were taken to hospital.

Mr Smith posted a picture on social media of him and his daughter dancing at a family party when she was little.

The family said in a statement: ‘We are utterly devastated at losing our beloved Ella. She was a much loved and caring daughter, sister and granddaughter.

‘She was a beautiful girl who will be missed by us all. We would like to thank everyone for their support at this horrific time. It has meant so much to the whole family as we grieve for our Ella.’

Adrian, her mother Maria and her brother and sister are being supported by specialist police officers from the Dyfed Powys force. 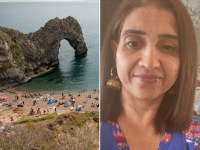 A family friend added: ‘You cannot imagine how Adrian must be feeling. It is every emergency worker’s worst nightmare to find your own child is a victim.

‘They are such a lovely family. Ella was so bubbly with all her future ahead of here.’

Ms Smith worked as a trainee nurse at the Parc Y Llyn Nursing and Residential Home in nearby Ambleston.

Owner David Van Dyk added: ‘She always brought a bright ray of sunshine into our lives. We are all absolutely devastated.

‘We all feel very strongly for her family and offer them our sympathy. She was so very happy and the residents here loved her.’

Tributes were paid by friends on social media to the ‘sweetest girl who ever walked the earth.’

One said: ‘This is so cruel. We just hope her family can remember her with as much love as we do.’

Dyfed-Powys Police appealed for dash cam footage from other drivers at the scene of the horrific crash.

A spokesman said: ‘We can confirm that the person who sadly died in the road traffic collision on the B4341 between Haverfordwest and Broadhaven on Sunday 13th June 2021 has been formally identified as 21-year-old Ella Smith from the Camrose area.’

Get in touch with our news team by emailing us at [email protected].

For more stories like this, check our news page.

MORE : Nurse crashed into moped rider while checking her emails at the wheel

Get your need-to-know latest news, feel-good stories, analysis and more

Benfica introduced Yaremchuk. The forward of the national team of Ukraine moved from Gent
17-year-old Gurna-Duat can move to Atalanta from Saint-Etienne for 10 million euros
Bayern did not win a single friendly match under Nagelsmann - 3 defeats and a draw
Goalkeeper Hradecki was appointed captain of Bayer
Hypercube has already reformatted several leagues. How did this affect the UEFA ranking and attendance?
Barcelona will not improve the offer for Morib. The player still refuses to renew his contract
Atletico President: Every club in Europe needs at least two Argentines to succeed

Man was drunk and in possession of a loaded firearm

Dozens killed by flash flooding in Taliban-held area of Afghanistan

Woman, 29, dies in car crash with digger as two injured and man, 23, arrested

A year after Beirut blast, Lebanon sinks deep into mire of corruption