To say there are mixed emotions swirling around the final week of this British & Irish Lions Test tour is an understatement. In theory everyone should be caught up in the delicious prospect of a winner-takes-all final Test against the reigning world champions. In practice this series is now testing everyone’s stamina, both on the field and in living rooms around the world.

If the “Timeless Test” on Saturday – a match which contained more stop-start inaction than a broken video recorder – becomes the norm then international rugby may as well pack up its tattered kitbag now. It was a shame, in some ways, that South Africa’s curfew regulations have eased this week. Had they switched the floodlights off with 20 minutes left and sent everyone home early there would certainly have been no complaints from the Lions.

Joking aside, the touring team’s prolonged second-half agony has prompted any number of uncomfortable questions for the sport’s administrators as well as the Lions’ head coach, Warren Gatland. If a Lions series is to remain the pinnacle of the game it urgently needs the third Test to deliver more entertainment than two teams kicking the ball skywards and seeing who can keep the citing officer busiest. Niggly, sour, unattractive … and that was just last week’s buildup.

Increasingly, such concerns go well beyond one harassed referee or an unsporting coach or a few dropped high balls. When a half of Test rugby lasts 63 minutes because the match officials are either consulting the television match official, lecturing the players or attempting to stop them snarling at each other, it really does feel as if the tail is wagging the dog.

While not every game can be like the Premiership final this year, interest in future Lions series will wane appreciably if this remains the default setting. When even someone such as Jonathan Davies, the great former Wales fly-half, calls it “a dreadful spectacle” and urges World Rugby to consider law changes to mitigate the box kicking, endless aerial bombardments and suffocating line speed, only a sadist would disagree.

This is not to decry the dominance of the Springbok forwards late on, nor the well-executed tries from Makazole Mapimpi and Lukhanyo Am which helped the hosts to win the second half 21-0. Their defence also continues to be formidable: in Munster they regard Jacques Nienaber as a defensive genius and this South African squad has now conceded just three tries in their past nine Tests. Then again, when a Lions side representing the cream of British & Irish back-play performs as unimaginatively as they did on Saturday, almost anyone would fancy keeping their line intact without too much bother.

Which is why Gatland, having had the Boks exactly where he wanted them, surely needs to pursue a different tack this Saturday. With the now Covid-free Springboks visibly better for having had more preparation time together, simply waiting until 60 minutes for their big forwards to blow up is not going be enough. The Lions need to create more, as well as finding other ways to circumvent South Africa’s power game, to avoid becoming only the third Lions side in history to surrender a series after winning the first Test. 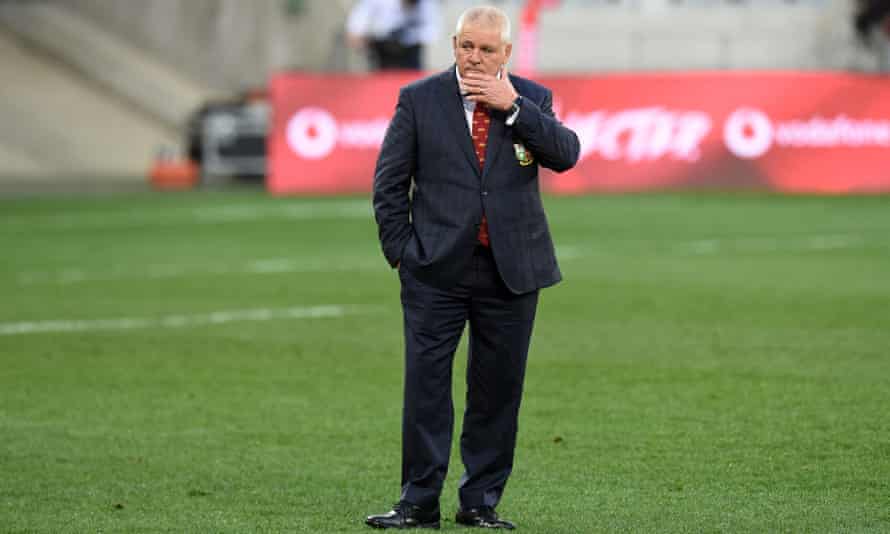 The Lions head coach, Warren Gatland, has a lot to consider before the third Test against South Africa. Photograph: David Gibson/Fotosport/Shutterstock

Certain changes would appear obvious. Win or lose last weekend, the Lions were always likely to require some fresh bodies and, fitness permitting, the Welsh trio of Liam Williams, Josh Adams and Wyn Jones all appear obvious starting candidates. Enforced citing-related alterations aside, there is also an argument for more ball-carrying dynamism and breakdown presence than has been evident in the first two Tests.

If, say, Bundee Aki starts at inside centre with his Ireland colleague Robbie Henshaw sliding out to No 13, could that open the door for someone such as Finn Russell to try to paint a few different pictures at No 10? During the Lions’ warmup on Saturday it was instructive to watch Russell’s dexterity and slick distribution, so much so that Gatland surely has to have the Racing 92 fly-half in the 23.

Do that and reinstating his Scotland teammate Ali Price at No 9 makes sense, as might the bench inclusion of Sam Simmonds whose pace would offer an alternative threat. Even switching Maro Itoje to the blindside and introducing another fresh specialist lock might be worth considering if the Lions really do want to roar back and surprise opponents who were regaining their old swagger in the final quarter.

None of that, though, will amount to a hill of kidney beans if the Lions cannot also retain their discipline. To many observers South Africa were lucky to finish with 15 players on the field but, equally, the Lions allowed their frustration to get the better of them. Whoever starts this Saturday it will not be mentally easy to reboot after so many weeks cooped up in their biosecure bubble and without any travelling fans to re-energise them in their darkest moments.

In that respect, at least, there remains some tension as the endgame beckons. In the recent past, third Tests have delivered big time: the controversial 2017 thriller in Auckland, the Wallaby trouncing in Sydney in 2013, the runaway Lions win at Ellis Park in 2009. Maybe by next Saturday night some of the more gloomy verdicts on rugby’s demise will have proved slightly premature.

For that to happen, though, it surely requires World Rugby to clear the air on the subject of Rassie Erasmus’s recent behaviour and to remind all concerned that the integrity of the game is more important than churlish short-term mind games. It will matter not whether the Lions or the Boks win this series if their global audience sighs with relief when it all ends or derives more fun from watching red or green paint dry.

Ronaldo offered help to a player in Australia who was put into a coma after an attack
PSG, greetings from Balashikha. We placed your messages on billboards around the Parc des Princes field
Juventus is 10 points behind the leading Napoli after 4 rounds of Serie A
Tiago will not play for Liverpool with Norwich and Brentford due to a calf injury
Oh, shit! And they want to play for Juve? Allegri swore after the match with Milan
Watzke on Holand's departure: Before the start of the season, they said that he would definitely leave us, but he is still here
Roy Keane: Tottenham were so bad against Chelsea that I couldn't believe it. Players don't want to defend themselves

'No sneakiness!' Ben Wallace insists Boris' submarine deal was 'not behind France's back'